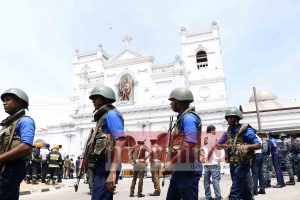 Next Saturday, 18 May 2019, marks the 10th anniversary of the end of the war in Sri Lanka. Since 18 May 2009 up until the 21 April 2019, Sri Lanka enjoyed absolute peace in every corner of the country. During this period, people who were frustrated by the near three-decade-long war, embraced the new-found freedom without any inhibition. This became more pronounced with the advent of the Yahapalanaya regime in 2015, which reopened closed roads and minimised surveillance.

The downside was that even the usually sharp military intelligence apparatus was lulled into a state of complacency. But on 21 April, Sri Lanka received such a shock that it more or less rebooted the entire system.

It took only a matter of hours for the seasoned security apparatus to get on top of the situation. Today, three weeks after that dark day, the combined security forces have been able to completely dismantle the mind boggling terror network that had spread its deadly tentacles to the far corners of this land.

With the detection of safe houses in geographically significant locations such as Wanathawilluwa in the Northwest, Kattankudy in the East, Hambantota in the South, Nuwara Eliya in the central hills, Colombo in the West, a huge bomb-making facility in the East, and even links to global software companies, it is becoming increasingly difficult to imagine that the eight bombs that went off on Easter Sunday were the only things on the drawing board.

What is clear is that the 259 people who laid down their lives, did so as martyrs, who through their deaths, saved the country from a greater calamity. Their sacrifice on Easter morning has undoubtedly saved hundreds of more innocent lives. The arrest of seven suicide bombers in Hambantota last week stands in testament of that.

Ever since the incident, fingers have been pointed at the Government for supposedly castrating the Intelligence Service, but it is clear that they have done their job and it is the political authority that failed. MP Sarath Fonseka speaking in Parliament last week insisted that the Security Council had discussed the National Thowheed Jamath (NTJ) threat on no less than 15 instances in the presence of the Commander in Chief and Defence Minister President Maithripala Sirisena. He went on to allege that the President kept looking at the roof each time this subject was discussed.

It was not until Minister Mangala Samaraweera took it upon himself to explain that only a dozen or so men from this unit were in custody and the reason for it, that the matter was put to rest.

It turns out that the men in custody were those accused of running a clandestine abduction racket during the height of the war where children of rich families were abducted for ransom and subsequently killed. At least a dozen victims had been killed and many others yet unaccounted for. It is this rogue unit, that had made the war a business opportunity, who are in custody.

Rogue military units have always been a liability for successive governments, but this is the first instance where such a unit has been busted and exposed. It is now up to the courts to decide who is innocent and who is not.

That problem apart, it seems that the President was eager to claim that the Jihadist threat is now over and is hoping against hope that this nightmare would just go away.
However, the reality is that unlike the LTTE, the current problem is not home grown. In fact, it’s a global phenomenon that has affected many western countries, most of which are still on edge following the attacks.

What needs to be kept in mind is the fact that as long as the money keeps coming, men and material can always be found. And the money is not going to run out anytime soon.

The Jihadists obviously chose Sri Lanka for a purpose. The extent of the unravelling network points to an elaborate plan. To believe or to assume that all this deadly infrastructure was put in place to produce eight suicide bombers and that the story has now ended, seems improbable.

Therefore, the investigating agencies must leave no stone unturned in their collective quest to get down to the bottom of it. To trivialise the matter as some are now attempting to do, will not only amount to an insult to the intelligence of the people but will also undermine the investigation process which is making spectacular progress.

Even if the current problem is neutralised, it is bound to recur every time the guard is down. Therefore, it is obligatory that a permanent mechanism is put in place to monitor every aspect of the country’s security with proper political supervision.

As Field Marshall Sarath Fonseka suggested in Parliament last week, the time has come for a full-time Minister of National Security, similar to the post created by late President J.R. Jayewardene, to tackle the security situation in the ‘80s.
Previous holders of the post include Lalith Athulathmudali and Ranjan Wijeratne – both of whom fell victim to the LTTE.

The Easter Sunday attacks shook Sri Lanka to the very core. With 30 years of war still fresh in the country’s collective memory, one cannot blame the people for going into a shell.

This is why even though government schools are open, there are no students attending them. The security barriers, barricades, and road blocks that have sprung up in the very same places as during the war, has created a fear psychosis that cannot be easily shaken off.

There is no doubt that the country needs to be on high alert and there can be no compromises on security, but in the decade since the end of the war, technology has evolved to such an extent that even wars are being fought in distant lands by drones and robots that are being controlled from thousands of miles away in state-of-the-art control rooms.

Sri Lanka needs to invest in modern surveillance technology and minimise war-like security measures. In other words, the way forward is through intelligent intelligence.

The art of survival

November 15, 2020 bySarah Hannan No Comments
Even though the health authorities would like to make us believe that the Covid-19 pandemic in Sri Lanka is under control, the continuing spike in the death toll, as well as the number of patients