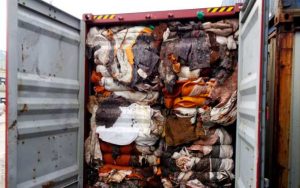 An Interim Order has been issued by the Court of Appeal against the moving the imported garbage from the Colombo Port and the Katunyake Free Trade Zone into the country.

A writ petition seeking a court order directing legal action to be taken against the parties liable for the waste containers was heard at the Court of Appeal yesterday and the case continued today (31).

During yesterday’s hearing, Romesh de Silva PC addressing Court clarified the position of Hayleys Free Zone Limited, which has been accused over importing the garbage.

October 27, 2020 byCharindra No Comments
The Cabinet of Ministers yesterday (26) decided that the only solution to control the spread of Covid 19 in the country was to ensure that the public adhered to the stipulated health guidelines.

July 29, 2019 bythemorninglk No Comments
The adverse weather which prevailed over the last few days affected the fishing activities of 20 multi-day boats that were at sea.