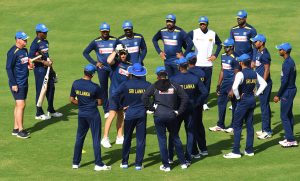 Sri Lanka Cricket has announced that the proposed Ireland Tour of Sri  Lanka, which was expected to take place during the months of January / February, 2020 has been postponed.

The tour was not part of SLC’s original broadcast agreement, which was inked during the year 2013, at a time when Ireland was not a full member country.

Hence, Sri Lanka Cricket in consultation with Ireland Cricket decided to reschedule the tour to a later date to ensure that the proposed one off test match will come under the next broadcast agreement, which SLC is planning to sign with a
prospective partner during the year 2020.

Under the original schedule, Ireland National Team was scheduled play one test match vs Sri Lanka from 08th to 12th February, 2020 during the proposed tour.

The New dates of the tour will be announced, once confirmed.

Injured Pathum Nissanka out of danger

October 31, 2018 byRevatha No Comments
Sri Lanka Board XI batsman Pathum Nissanka, who was playing for the Board XI in the 1st practice game against England, at the NCC ground, was hospitalised this evening after he was hit on the helmet.

November 8, 2018 byRevatha No Comments
Thus SL Women lost both their warm-up games conducted before the tournament proper starting on Friday.