Is Sri Lanka getting old before getting rich?

Life is often said to be a continuous battle between time, money, and energy. When we were kids, we had time and energy, but were limited by our lack of access to money. When we started working and earning money, time was difficult to find. As we walk the journey of life, we will come to a period where we may have time and money, but not energy.

Let’s apply the same variables to Sri Lanka as a country to see where we stand in terms of money, time, and energy. The picture is, unfortunately, shocking.

If we keep political flags aside, our current mayhem is a result of bad policy choices that we have made and supported for the last 70 years. It is easy to point fingers at politicians and they surely must take accountability for their actions, but the deeper question is: Aren’t the politicians that we are electing and their policies a reflection of our choices?

The wealth of a country and its people is often considered over time. A person classified as “poor” by current standards still has a lifestyle better than an emperor would have had a few centuries ago. But this doesn’t mean the poor person is an emperor today. The world has moved in giant leaps and the real challenge is to be comparative with current standards. Unfortunately, us Sri Lankans live in a bubble of constant reflection of prosperity in past millennia and focus solely on recreating the glories of a bygone era. There is nothing wrong with tapping into knowledge in history and learning from it, but we need to recalibrate these lessons and understand that the context and the consequences are completely different now. Trying the same formula which worked for us millennia ago nowadays will not make us rich before we get old. 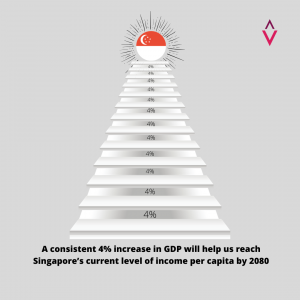 Every time a discussion on open trade and competition is started, most of our fellow Sri Lankans march to the streets demanding protectionism. The consequences are evident. Our trade openness has dropped to about 37% from 78% over the span of a few decades. We still believe having higher import tariffs will improve local production and competitiveness in the market. Hiding from competition in this way is the same as trying to win a Cricket World Cup without playing a single match with an international team.

The extent to which we have hidden from competition is at an absurd level. Would you believe me if I told you that most of our daily household products are protected by unreal custom duties and protectionist taxes which drive our cost of living through the roof? This is in a country where more than 50% of its population finds it difficult to earn even $ 3 a day.

Ravi Ratnasabapathy has highlighted the absurdity of taxes on commonly used household products in a column in the Echelon business magazine (4). The import taxes for cereal add up to 101%, fruit juices to 107%, noodles to 101%, aftershave to 120%, toothpaste to 107%, etc. The list is too long to continue.

The big question is what this Government could do to make our people rich before they get old. First, we have to understand that all the economic problems we face are interconnected and that there are no isolated solutions. A summary of problems is listed below:

The Government has to take a combined approach and implement a rapid reform process if we are to have even the wildest chance to move an inch forward from where we are right now. At this point of time, the Government seems to churn its wheels through personality-driven power and dynamic individuals whose focus is on getting things done fast. In the first place, the Government needs to understand there is only so much development that can be sustained through a personality-driven approach.

For example, trying to ease traffic congestion through the use of Military Police is a short-term solution. The long-term answer to this problem is the introduction of a high-quality public transport system. But to improve public transport, certain reforms are necessary, such as the introduction of competition to railway operations, easily obtainable route permits for luxury buses, and price openness in order to develop innovative transportation options and products.

Without an understanding of long-term solutions, government intervention in bringing more buses under the Ceylon Transport Board (CTB) and shuffling the train timetable will not bring sustainable results. Instead, this will burn the Government’s energy and precious time.

The same applies for all of the above economic issues. The Government should address low-hanging fruits such as the implementation of a proper visa regime for foreigners who wish to work in Sri Lanka, and allow for foreign spouses who are married to Sri Lankans to work here. Having diversity means introducing more innovativeness into the system.

The second step to addressing these economic issues is fiscal consolidation and the cutting of existing red tape which affect business. President Rajapaksa announced his support for eliminating unnecessary regulations during his Independence Day speech, and the time has come to walk the talk. The barriers for imports and exports are still enormous, ranging from obtaining a loan to getting a license.

These regulatory and legislative barriers need to be addressed. We are then left with no other option but further fiscal consolidation. Unnecessary political recruitments have to be frozen and government expenditure needs to be tightened. Very importantly, the Government has to start somewhere and look beyond rosy elections through to bitter deliverables. Things will only get darker as the clock ticks on.

To be honest, getting rich before we get old is only a dream for our generation. The question is: Do we want our kids to get old before they get rich too?

January 18, 2021 byRusiru Keppetipola No Comments
Having being given a yellowfin tuna fish quota of 5,600 tonnes for the year 2021 by the European Union, the State Ministry of Ornamental Fish, Inland Fish and Prawn Farming..

South Korea to set up Industrial Park in Sri Lanka?