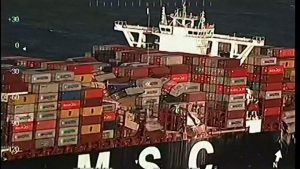 Extensive debris has washed up on islands off the Dutch north coast after some 270 containers including chemicals fell off a cargo ship in a storm.

As the extent of pollution became clear on five islands including Terschelling, coastguards searched the North Sea for missing containers.

The cargo fell off the MSC Zoe near the German island of Borkum, but the tide carried many of them to the south-west.

One of those containers had a cargo of peroxide powder, and a 25kg bag of the chemical was found on the island of Schiermonnikoog on Thursday, along with several containers and their contents. (BBC)

July 2, 2019 byRandev No Comments
Hong Kong's leader Carrie Lam has condemned what she called the "extreme use of violence" by protesters who stormed and vandalised the territory's parliament on Monday night.