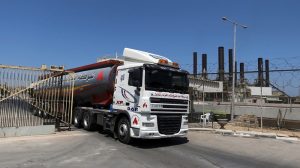 Israel has lifted a restriction on fuel delivered to Gaza for electricity, a week after cutting the flow by half over a series of violent incidents.

Israeli Defense Ministry unit COGAT announced on August 26 that it was halving the amount of fuel allowed into Gaza from its territory, after three rockets were fired at the Jewish state the day before. Israel responded with airstrikes against the Gaza Strip’s ruling Hamas movement.

A further round occurred on August 27, when Gaza militants fired a mortar round across the border and an Israeli aircraft struck a Hamas post in northern Gaza in response, AFP reports. There have not been projectile launches from Gaza since.

A defense official said that the fuel restriction had been removed on Sunday. Israel maintains a crippling blockade of Gaza, which it says is necessary to isolate Hamas, but which critics label collective punishment.RT

Theresa May to join EU summit after surviving vote

December 13, 2018 byRandev No Comments
Theresa May is heading to Brussels for an EU summit, less than 24 hours after surviving a vote of confidence.