Playing Test cricket in Galle without fans is like a wedding without the bridegroom! But that will be the case when England meet Sri Lanka tomorrow (14) at the most iconic and picturesque venue in the island for their first Test. 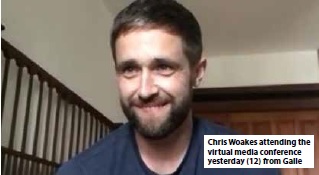 “It’s going to be a real shame to have played without fans. It is really tricky to play like that. But it’s a situation that we’ve been in, in the world right now,” said Christopher Roger Woakes, the 33-year-old England all-rounder yesterday (12) joining in a virtual media conference from the England team’s hotel in Galle.

Getting used to it

With open stands, sunny and windy conditions, the very close proximity to the Indian Ocean, and the monumental Dutch Fortress, the Galle International Cricket Stadium provides one of the most electrifying cricketing atmospheres when the grounds, the vicinity, and the overlooking ramparts are all packed with people – which is often the case when any home Test series starts at this venue.

But the 38-Test right-hander with 1,321 runs and 112 wickets in the format said the England players are getting used to the inevitable situation – playing under closed doors due to a surging pandemic. “We’re getting used to it, playing without fans, and we’ve got to have to get used to it, against our will. But again, it is obviously a big shame not to have fans in Galle,” he said.

“It’s a great place to play cricket. I know the guys are excited about it. But it’s a shame to play without not only our own fans but the locals as well. It would have been really a great atmosphere. I know that the people here are really passionate about their cricket,” the 2019 World Cup winner for England added.

Woakes has played only two Tests so far against Sri Lanka – both of them at home in 2016 – since his career began in August 2013. He has never played Tests in Sri Lanka and tomorrow’s match could be his first in the country. 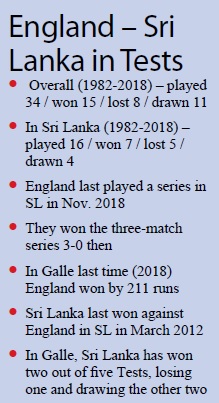 Mali is coming back for alms-giving!

June 17, 2019 byRevatha No Comments
Malinga had thus spent barely 24 hours in London before heading back home for the family matter.