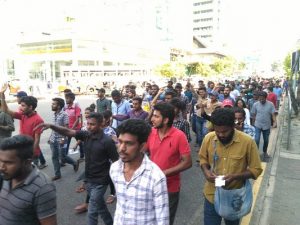 The Inter University Students’ Federation(IUSF) today alleged that intimidation tactics used by the previous regimes are continued under the new government.

The IUSF had launched a protest march yesterday demanding Mahapola and Shishyadara issues be resolved by the new government.

The protest concluded with an amicable discussion between student representatives and Higher Education Ministry officials.

However, a member of the Inter University Students’ Federation told The Sunday Morning that many students were intimidated by the police on the day before the protest(8).

According to the member, many active students representing an array of universities under the IUSF were questioned by the police over the protest which was scheduled the following day(9).

He said ten students were requested to appear before court on the day of the protest and were warned of arrest if the request was not adhered to.

“These intimidation tactics were used by previous governments and the only difference is that this government doesn’t use barricades,” the member said.

“Inviting us for discussions in a step forward, however this could also be a political ploy to face the forthcoming elections,” he pointed out.

President Gotabaya Rajapaksa on his twitter account yesterday(9) said he had invited the students to the President’s Office to meet with the Additional Secretary & Higher Education officials to discuss grievances, a decision he called was “contrary to the usual tear-gas & baton charge that greeted university student protesters previously'”.

Power purchased from private plant; CEB will lose over Rs. 2.7b