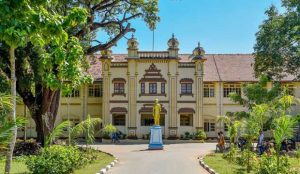 The Jaffna Magistrate’s Court has granted bail today (16) to several student activists of the Jaffna University who were arrested under the State of Emergency during search operations.

The Students were arrested due to the possession of pictures of former LTTE leader Velupillai Prabhakaran and theoretician Anton Balasingham which were uncovered during the massive search operations carried out by security forces.

Magistrate Peter Paul has released several student activists including the President of the Jaffna Students Union and its secretary on a personal bail of Rs. 100,000.

The students had also been ordered to appear before the Kopai Police every Sunday as a term in their sentence.

July 29, 2019 bythemorninglk No Comments
The adverse weather which prevailed over the last few days affected the fishing activities of 20 multi-day boats that were at sea.

November 17, 2019 byEaswaran No Comments
Gotabaya Rajapaksa, presidential candidate of Sri Lanka Podujana Permuna (SLPP), gains the most number of votes in the Monaragala electorate of the Monaragala District.