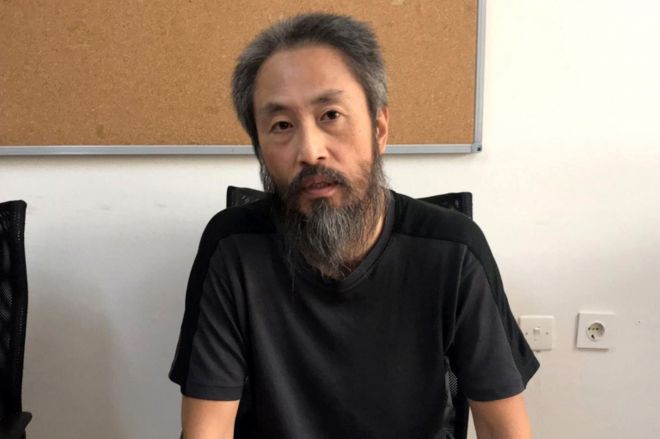 A Japanese freelance journalist held hostage by militants in northern Syria for three years has been freed and has confirmed he is safe and well.

In a video sent from the Turkish border, Jumpei Yasuda spoke in English and gave his name, confirming he had been held hostage for 40 months.

His wife Myu, who campaigned for his release, was appearing live on Japanese TV when the news was announced.

Yasuda was also held hostage during the US-led invasion of Iraq in 2004.

He was released then after several days.

The reporter went missing in June 2015 after travelling from Turkey to Syria to report on the country’s civil war.

He was reportedly held by the al-Qaeda-linked group Hayat Tahrir al-Sham, which was once known as al-Nusra Front.

“I have been held in Syria for 40 months, now in Turkey. Now I’m in safe condition. Thank you very much,” Yasuda said in the video from an immigration centre in the Turkish city of Antakya.

Japanese diplomats had travelled there to confirm his identity.

His wife was moved to tears on hearing the news and said “thank you… thank you for praying for him and taking action”.

Yasuda is expected to head home to Japan soon.

Four months ago, a video that appeared to show him speaking in October 2017 was broadcast by a Japanese TV channel. “I hope all of my family is fine,” he said. “I want to see you.”

The Japan Times reported that the group had demanded a $ 10m (£ 7.7m) for Yasuda’s release.

Qatar has worked to help free other hostages held by opposition armed groups in Syria, including the American journalist Peter Theo Curtis, who was released by al-Nusra Front in 2014.

The Gulf emirate has denied paying ransoms, but has been accused of handing over hundreds of millions of dollars to secure the release of 26 Qataris, including several royal family members, abducted in Iraq by a pro-Iranian militia.

Japan had been criticised for its response to previous kidnappings of its citizens in Syria. There was an outpouring of anger and grief when another journalist Kenji Goto was beheaded by Islamic State militants in early 2015.

His killing came a week after the apparent beheading of another Japanese man, Haruna Yukawa. (BBC)

Joe Biden sworn in as US President

January 20, 2021 byLahiru Pothmulla No Comments
Joe Biden was sworn in as the 46th president of the United States a short while ago. He was sworn in by Chief Supreme Court Justice John Roberts, CNN said.