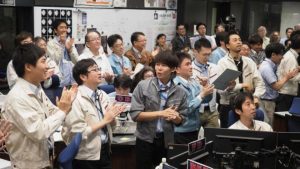 A Japanese spacecraft has landed on a faraway asteroid, where it will collect space rock that may hold clues to how the universe evolved.

The successful touchdown on the Ryugu asteroid was met with relief and cheering in the control room at Japan’s space agency, JAXA.

It is the second landing for the unmanned Hayabusa-2, which touched down on the asteroid in February.

After blasting a crater into Ryugu, it has returned to pick up fresh rubble.

As the samples will come from within the asteroid, they will not have been exposed to the harsh environment of space.

It’s hoped the rock will give scientists more data on the origins of the Solar System.

Hayabusa-2 is due to bring the specimens back to Earth next year.

Left over from 4.5 billion years ago

Ryugu belongs to a particularly primitive type of space rock, left over from the early days of our Solar System.

It may therefore contain clues about the conditions and chemistry of that time – some 4.5 billion years ago.

Asteroids are essentially leftover building materials from the formation of the Solar System.

It’s also thought they may contain chemical compounds that could have been important for kick-starting life on Earth.

They can contain water, organic (carbon-rich) compounds and precious metals.

The last of those has even tempted several companies to look into the feasibility of asteroid mining. BBC

February 22, 2020 byTSM Web Desk No Comments
The head of the World Health Organization (WHO) has expressed concern at the number of coronavirus cases with no clear link to China or other confirmed cases.

March 21, 2019 byRandev No Comments
Aid agencies are scrambling to reach survivors of Cyclone Idai in Mozambique as the full scale of the disaster becomes clear.