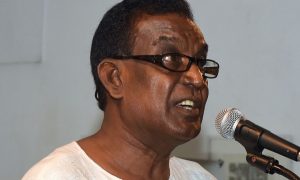 Founder of The Workshop Players, and renowned stage play producer and director Jerome L. De Silva was awarded the national honour and title of Kala Keerthi by President Maithripala Sirisena.

“This is my 50th year in theatre and I am honoured this award comes at such a significant time in my career,” shared De Silva with The Sunday Morning, adding also that “this is the first time in the history of the award that someone from English theatre has received this accolade.”

He was awarded the honour for his extraordinary achievements in and contributions towards arts and drama.

De Silva continued that the Presidential Secretariat had called and asked him if he would accept the award and he had said yes; it is his greatest pleasure to have received it.

De Silva has over 75 productions to his credit.

The Kala Keerthi is a national honour awarded “for extraordinary achievements and contributions in arts, culture and drama”.

It is the highest national honour for arts, culture and drama in Sri Lanka. It is conventionally used as a title or prefix to the awardee’s name.

Producer vs. consumer who is more responsible?

October 2, 2019 byThe Sunday Morning No Comments
Being environmentally friendly is a lifestyle choice you make and a decision that has to be made every day. It certainly is a commitment and may inconvenience you as opposed to what you are used to.

Cold or flu – do you know the difference?

June 12, 2019 bythemorninglk No Comments
“Is there a flu going around?” is a common question most medical professionals get asked.