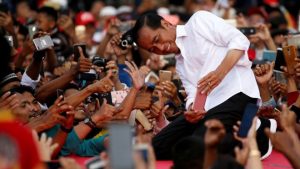 The result was released a day ahead of schedule in the early hours of Tuesday, amid fears of violent unrest.

Around 32,000 security personnel were deployed across the capital Jakarta, AFP news agency reports.

Mr Prabowo, 67, has not yet confirmed if he will challenge the result in court.

Ahead of the final tally he had alleged “widespread cheating” and warned of potential street protests. In 2014 Mr Prabowo lost a court challenge following an election defeat by Mr Widodo.

The latest vote followed a bitter campaign in which religion played a key role, but independent observers have said it was free and fair.Mr Widodo won 55.5% of the vote to Mr Prabowo’s 44.5%, the election commission said. More than 192 million people were eligible to vote in the 17 April poll, choosing 20,000 local and national lawmakers.

Azis Subekti, a witness from the retired general’s campaign team, refused to sign the results.

“We won’t give up in the face of this injustice, cheating, lies, and these actions against democracy,” he said. (BBC)

January 31, 2019 byRandev No Comments
Cities are all but shutting down across the US Midwest as the region shivers in a deadly cold snap known as a polar vortex.

December 11, 2018 byMalik No Comments
Theresa May will meet European leaders and EU officials later for talks aimed at rescuing her Brexit deal.