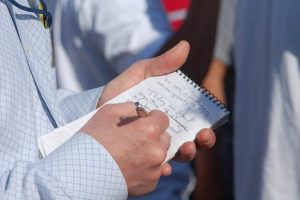 A journalist who writes columns for leading newspapers is currently being investigated by the Organised Crime Division of the Police, The Sunday Morning learnt.

Kusal Perera, a columnist for the several newspapers including the Daily Mirror is being investigated.

Perera, speaking to The Sunday Morning, said that the Organised Crime Division Police officers had visited the Daily Mirror newspaper on Friday (14) and made inquiries about an article he had written recently.

“I was told by the editorial staff that the police officer had visited the office and had inquired about an article I had written on 17 May,” Perera said.

He said that he had told the editorial to divulge his contact details to the authorities.

“They had asked for my contact details and I said to give it to them so that the Police could contact me as soon as possible,” he said.

However, he was yet to be contacted by the Police.

He went on to say that he was not aware of the charges against him.

“All I know is that the Organised Crime Division had submitted a fact sheet to the Colombo Magistrate Courts, but I’m unaware of the charges.”

October 20, 2019 byThe Sunday Morning No Comments
The Sri Lankan Government has urged the UK to honour its obligation as per the Vienna Convention on Diplomatic Relations.

Gnanasara pardon to be challenged

May 26, 2019 bythemorninglk No Comments
The presidential pardon granted to the General Secretary of the Bodu Bala Sena (BBS) Ven. Galagodaththe Gnanasara Thera, is likely to be challenged in court.