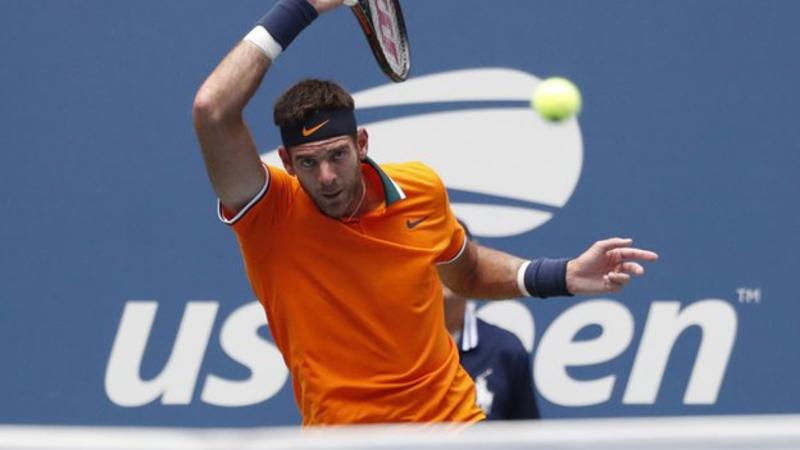 The humidity was so stifling officials suspended junior matches on outside courts for more than two hours.

Del Potro and Isner had a 10-minute break between the third and fourth sets as part of the extreme heat policy.

Del Potro joked: “I had a shower, re-taped my ankles and laid down on the table. I didn’t want to come back out.”

Isner said he got through 11 shirts and estimated he lost between eight and 10 pounds through sweating as temperatures approached 38C inside Arthur Ashe Stadium.

“It’s tough conditions out there, no doubt,” said the American. “It’s very humid. The air is pretty still for whatever reason. Maybe it’s the roof structure.”

World number 11 Isner took the opening set on a tie-break before Del Potro levelled following a break in the fourth game of the second set.

The Argentine world number three won the next tie-break and then broke in the second game of the fourth set en route to victory in three hours and 31 minutes.

The 2009 champion will face Rafael Nadal or Dominic Thiem on Friday.

The 29-year-old said his serves, which often matched Isner’s for pace, were his biggest weapon on a physically punishing day.

“I’m so happy to reach another semi-final in my favourite tournament that is very special to me,” he said.

“Beating John in these kind of matches – it’s epic. We were both tired in the end and I survived with my serves during the match.”

The Argentine made the first big mistake of the match when he conceded a mini-break at 3-2 during the first set tie-break.

Isner went on to take the set, but Del Potro bounced back as his opponent made an error on the second of three break points in the fourth game.

Both players had two chances each to break serve in the third set which was eventually decided by another tie-break, which Del Potro won.

The players decided to take the option of a 10-minute interval, but neither looked to have benefitted much on the resumption of play.

The crucial break came in Isner’s opening service game of the fourth as Del Potro delivered a flat double-handed backhand which was too good for the American.

Del Potro sealed victory in the eighth game when Isner snatched at a shot near the net. (BBC Sport)