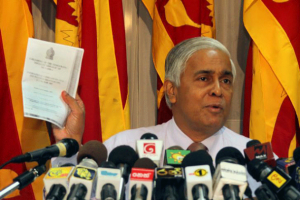 A Supreme Court Judge has withdrawn from the bench hearing the contempt of court case filed against Chief Justice Sarath N. Silva.

Supreme Court Justice Prasanna Jayawardena stepped down from the bench as he stated in open court today (08) that he was a member of the bench which had issued the court order, which is the basis for the defendant’s statement, and that therefore he does not wish to participate in this hearing.

A case had been filed against Sarath N. Silva over a statement he had made in December last year critical of the court.

Govt. to take measures to increase supply of face masks

January 28, 2020 byTSM Web Desk No Comments
The Government today assured that it will take measures to  increase supply of face masks in the country.

September 3, 2018 byThe Sunday Morning No Comments
A UN Independent Expert, will this week, study the impact of the Chinese debt trap on Sri Lanka.