September 28, 2018 by The Sunday Morning No Comments 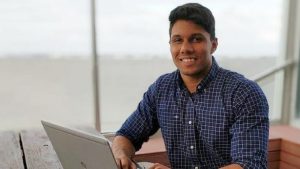 Sri Lankan youth, Kamer Nizamdeen, who was arrested in Sydney, Australia earlier this month for alleged terrorism related offences was granted bail by the Central Local Courts in Sydney a short while ago.

The court granted bail without cash to Kamer on exceptional grounds and the police did not oppose bail, sources from the family told The Morning.

Kamer’s family had petitioned courts over his arrest and the case that was initially slated to be taken up for hearing on October 23rd was taken up today, family members further said.

The 25 year old Kamer was arrested by members of the NSW Joint Counter Terrorism Team at Kensington a few weeks back. Police has alleged documents containing graphically detailed plans to facilitate terrorism attacks were found at the University of NSW, where Kamer was a staff member.

The arrest was made based on a notebook that had detailed certain terror plots. However, Kamer’s family demanded that a proper analysis be carried out on the handwriting in the notebook since it did not belong to Kamer.

November 9, 2020 byMihi Perera No Comments
With the easing of the curfew, the disinfected Central Mail Exchange has reopened today (09) for a limited number of duties, Post Master General Ranjith Ariyaratne said.