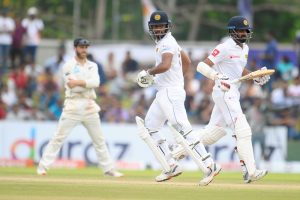 On the back of their openers’ unbeaten 133-run stand across two sessions, Sri Lanka took a giant stride towards chasing down 268 with one day to go The partnership between Dimuth Karunaratne (71 n.o.) and Lahiru Thirimanne (57 n.o.) is the highest by a Sri Lanka opening pair in the fourth innings, and they denied New Zealand any wickets for 50 overs setting up an epic day in Galle.

On a deteriorating surface, they were made to work hard early on by Trent Boult and Tim Southee. Southee’s inswingers to the left-handers had them splicing towards midwicket, while Boult’s outswingers kept the openers guessing. Will Somerville and Mitchell Santner bowled long spells searching for a breakthrough before tea, but the settled opening pair milked them, cutting them square or flicking through the leg side.

Thirimanne, in particular, looked out of touch early, but came out of his shell after the first drinks interval. A Santner over where Thirimanne attempted a reverse sweep was the moment where he finally broke free.

Karunaratne enjoyed the second half of the post-lunch session too, hitting the innings’ first four in the 22nd over. The Sri Lanka captain hit one more four – in the session’s final over – but sandwiched between those boundaries were numerous twos that kept the scoreboard ticking. Karunaratne, though, was lucky to go into the tea break still unbeaten, having been dropped by wicketkeeper BJ Watling off an under-edged cut. That shot brought up his 23rd Test half-century.

After tea, Thirimanne clattered Southee with a cut to further consolidate. An under-edged sweep past Watling brought up Sri Lanka’s hundred. Three balls later, Karunaratne offered New Zealand a second chance, as he clipped one to the short-leg fielder, but the ball popped out of Tom Latham’s hands. Five deliveries later, Watling missed a stumping chance to dismiss Karunaratne off Somerville’s bowling to hand him a third life.

At the other end, Thirimanne kept upping a gear. He brought out the sweeps and reverse sweeps to the spinners while tickling anything on his legs past the keeper. One particular nudge down leg in the 45th over brought up his first Test half-century since November 2017.

Boult returned for a second spell with the natural light diminishing but found no success, and after 18 overs in the third session, the umpires called stumps due to poor light. The Sri Lanka openers walked back to applause from a sizeable Saturday crowd.

Earlier in the day, New Zealand’s lower order began the morning looking to extend a 177-run lead with three wickets in hand. On Friday, Latham had declared at the post-match press conference that they would be happy setting any total above 200. However, a dogged show from their lower order ensured New Zealand went well past that mark, setting Sri Lanka a tricky chase of 268. But the way Sri Lanka’s openers started, it seemed like they learnt a thing or two from the efforts displayed by Watling, Somerville and Boult before lunch.

Watling and Somerville frustrated Sri Lanka after a 35-minute rain delay in the morning. Resuming on 195 for 7, they were unperturbed by the old ball, so it wasn’t long before Karunaratne opted for the new one. That worked in New Zealand’s favour as runs flowed, and Watling steadily gave Somerville more strike.

Somerville repaid the faith, by picking the gaps off bad deliveries and bunting the good ones, successfully negating the spin threat of Lasith Embuldeniya and Akila Dananjaya on a day four pitch. Watling found the occasional boundary off the pace bowlers, using his back-foot punches to great effect. While facing spin, he used his feet to mess with the bowler’s lengths.

That’s not to say Sri Lanka’s bowlers were easily rattled. Suranga Lakmal found the length to seam the ball in, and it whizzed past batsmen’s outside edge on a couple of occasions. Embuldeniya and Dananjaya had a few close lbw shouts too, but it was Lahiru Kumara who finally broke the 46-run stand that seemed to have taken the game away from Sri Lanka. A length ball that jagged away after hitting the deck found Watling’s outside edge after his crucial 77 had taken New Zealand’s lead past 200.

Boult then joined Somerville for a period of very entertaining cricket. Boult moved around to nudge short balls away for four or danced down the track to swipe them over midwicket, forcing Sri Lanka to go on the defensive. The big gaps then meant Somerville comfortably went into his thirties by picking the ones and twos.

Boult fell trying to ramp a short ball over third man, though by then Somerville had gone past his highest first-class score. With only the No. 11 for company, he began to farm the strike, only to realise it wasn’t particularly necessary as Ajaz Patel showed he could nudge the spinners around for singles and even crunch a slog sweep to the boundary off Dhananjaya de Silva. Ajaz was eventually out lbw trying to defend the offspinner, leaving Somerville ten short of a maiden first-class fifty. But New Zealand’s last three wickets – in retrospect, the only ones to fall on the day – had added 90 valuable runs.