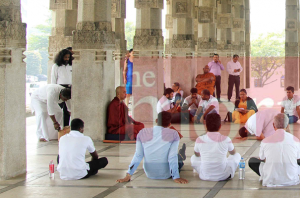 Ven. Ududumbara Kashyapa Thera has called off his fast unto death strike,  upon the receipt of letters from the Premier and the two presidential front-runners Gotabaya Rajapaksa and Sajith Premadasa.

The Premier, Rajapaksa and Premadasa have assured that the MCC agreement will not signed before the Presidential polls.

Another 6 deportees including Madush’s cousin in custody

April 17, 2019 byRandev No Comments
Another six individuals including a relative of underworld kingpin Makandure Madush arrived in Sri Lanka from Dubai and were detained for further questioning today (17).

February 1, 2020 byTSM Web Desk No Comments
International reports have revealed that Airbus has bribed a wife of an executive of SriLankan Airlines to secure an A350 aircraft deal.