October 26, 2019 by The Sunday Morning No Comments 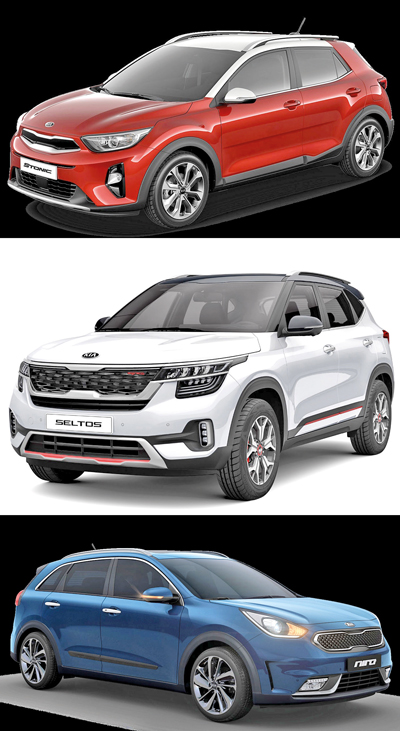 Korean carmaker Kia will launch three SUVs – the Stonic, Seltos, and Niro – in Sri Lanka in November and December 2019, under the stewardship of the recently restructured Kia Motors (Lanka).

“We are delighted to announce the imminent arrival of three of the most exciting newcomers in the Kia stable,” Kia Motors (Lanka) Executive Director/Chief Operating Officer Andrew Perera said. “Kia’s ‘power to surprise’ remains as strong as ever, with outstanding best-in-class design and performance, offered at extraordinary value-for-money price tags – the mantra behind the success of icons like the Sorento and the Sportage.”

Designed and built for the young at heart, the three new SUVs will all be priced at under Rs. 10 million inclusive of tax, Perera disclosed, with the Stonic selling at Rs. 4.8-5.3 million; the Seltos at Rs. 7.5-8 million, and the hybrid, eco-friendly Niro, which holds a Guinness World Record® title for lowest fuel consumption, selling at Rs. 9.5 million.

Kia Motors (Lanka), which has represented the Kia brand in Sri Lanka since 1996, recently underwent a change in corporate structure. With its new Rs. 800 million logistics centre in Malabe as the hub for a network of owned subsidiaries and franchised satellite sales, service, and spare parts outlets, the new operational structure is designed to drive a new phase of growth for Kia, one of the most popular automobile brands in the country.

August 22, 2019 byCharindra No Comments
Sri Lanka Tourism is expecting the participation of over 25,000 tourists from around 40 countries for the Bohra Global Convention that is set to take place from 1 September to 10 September.