Kim accuses US of ‘bad faith’ 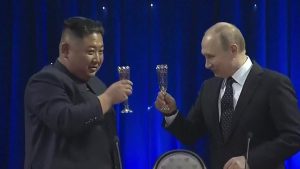 North Korean leader Kim Jong-un has accused the US of acting in “bad faith” during the summit earlier this year with President Donald Trump, according to the Korean Central News Agency.

He also said peace in the Korean peninsula would depend entirely on Washington.

Kim made his remarks at Thursday’s summit with Russia’s President Vladimir Putin in Vladivostok.

The visit would take place “at a convenient time,” the news agency added.

Kim Jong-un reportedly told Vladimir Putin that “the situation on the Korean peninsula and the region is now at a standstill and has reached a critical point”.

He warned the situation “may return to its original state as the US took a unilateral attitude in bad faith” during recent talks.

It comes a week after Pyongyang accused the US of derailing peace talks.

Negotiations between the two countries broke down during a summit in Vietnam in February, with no deal reached over North Korea’s nuclear weapons.

Those talks reportedly stalled over North Korea’s demand for full economic sanctions relief in return for some denuclearisation commitments – a deal the US was not willing to make.

During Thursday’s summit in Vladivostok, President Putin attempted to act as arbiter, saying Kim needed international security guarantees if he was to end his nuclear programme.

Such guarantees would need to be offered within a multinational framework, the Russian leader added.

“We need to… return to a state where international law, not the law of the strongest, determines the situation in the world,” Mr Putin said.

Kim greeted Russian officials warmly when he arrived in Russia on Wednesday.

He praised the summit as a “very meaningful one-on-one exchange,” and said he hoped to usher in a “new heyday” between Moscow and Pyongyang. (BBC)

November 8, 2018 byMalik No Comments
US Attorney General Jeff Sessions has been fired by President Donald Trump.

April 11, 2019 byRandev No Comments
Wikileaks co-founder Julian Assange has been arrested at the Ecuadorian embassy in London.