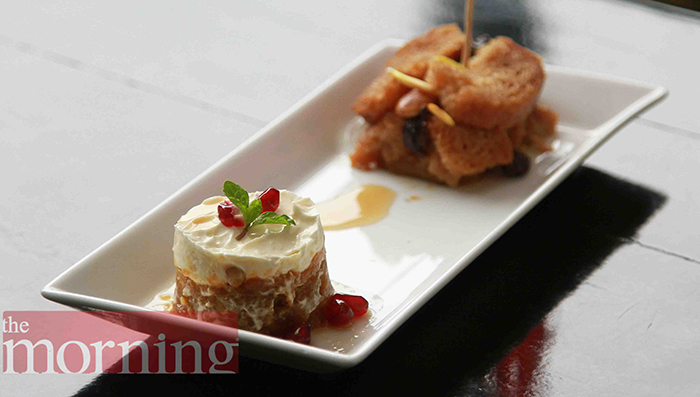 In view of the 208th Mexican National Day The Kingsbury will be featuring a Mexican themed a la carte menu from 21 – 27 September at The Grill, carefully curated by Chef Alondra Maldonando, who has worked at some of the best restaurants in Buenos Aires and is well-known for her cookbooks and culinary teaching; this is further proved by her many accolades.

She states that her intention is to bring homemade food into restaurants. She is accompanied by Chef Marco Valdivia who is the Executive Chef at Emiliano Restaurante in Tepic and is a founding member of the Nayarita Academy of Gastronomy. We had the opportunity of being invited to a special tasting of certain dishes on their menu and here’s what we thought about it.

(Please note that the actual dish is a bigger portion)

Just like the name suggests, it was packed with a berry-flavoured punch and not only did it look Instagram-worthy with its dark red and orange concoction but it also tasted amazing.

This too looked amazing with its purple petals immersed in the clear liquid and went perfectly with the meal and had just the right amount of alcohol.

Do try their cocktails as they are quite exquisite and perfectly accompany the food.

This featured raw scallop is submerged in a flavourful broth which consisted of cilantro and marinade which was lime-based. It was tangy and refreshing and reminded us of a good pickle. It was accompanied by crunchy onions which balanced out the texture.

The prawn was well-cooked and consisted of classic Mexican flavours of tomato, onion and green chili and was accompanied by a smooth puree. Whilst the empanada itself was well-cooked, it could have been a tad crunchier.

This took us quite by surprise as beans aren’t usually the tastiest vegetables. However, this bean-based soup proved otherwise and had a lovely earthy flavour accompanied with raw crunchy avocado and we couldn’t get enough. A definite must-try and don’t let the beans throw you off.

The sauce has the consistency of a puree and had a hint of cinnamon which was quite unique so much so that it upstaged the chicken. The chicken was tender and juicy and was well balanced against the flavour-packed sauce.

The pork was everything you could wish for – juicy and crunchy at the same time whilst not being over-powered by condiments, allowing the tangy, spicy, smoky mustard sauce to do its job and successfully complement the pork. However, we also received a stuffed dried red chilli which was stuffed with gooey cheese and this was a definite show stopper. We thought it was quite a unique pairing. If you love spicy food, this chilli is perfect as although you get a sharp tang of chilli, the cheese smoothens it out and leaves you wanting more. This was one of our personal favourites.

This is a dessert which is traditionally made during the holy week. It consisted of a warm soaked bread pudding which has walnuts and raisins and felt Christmassy. It also had a pumpkin-based dessert and a rich cream cheese topping which complemented the earthy pumpkin. Whilst it was an uncommon pairing that worked quite well, it required a light or refreshing element as it was quite heavy.

Overall the dishes we tasted successfully brought out the Mexican.

So go and check out Mexican Week at The Grill and Kingsbury as they have more tantalising and exquisite dishes on their menu; don’t miss out on giving your taste buds a treat.

May 26, 2019 bythemorninglk No Comments
What Sri Lanka needs for greater recognition