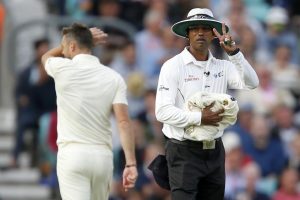 Dharmasena hoped this award would inspire other Sri Lanka officials

Rishabh Pant of India has been named as the ICC Emerging Player of the Year, Scotland’s Calum MacLeod crowned the ICC Associate Player of the Year, Kane Williamson won the ICC Spirit of Cricket award and Kumar Dharmasena is the ICC Umpire of the Year 2018, winning the prestigious David Shepherd Trophy.

Kumar Dharmasena was voted as Umpire of the Year by international captains and ICC Match Referees, winning the David Shepherd Trophy for the second time.

Dharmasena hoped this award would inspire other Sri Lanka officials: “It has been a very satisfying year for me and this award from the ICC is a great honour and privilege. This comes six years after I was first named for the award and will inspire me to keep doing the job I love so much. I have always been passionate about cricket, both as a player and an umpire and look forward to keep working hard and challenging myself in order to meet the demands of this great game.

“I would like to thank my wife for being the strength behind my achievements and also my kids for their support and understanding. I would like to thank Mr. Peter Manuel, my coach, for his guidance from the start of my umpiring career, together with all the other coaches from ICC and Sri Lanka Cricket. I take this opportunity to thank all my fellow colleagues for all the encouragement and support over the years, without which this would not have been possible.”

Finch, who has been leading Australia in white-ball cricket, was an easy winner of the T20I award after breaking the world record for the highest score for the second time. The 32-year-old had struck 16 fours and 10 sixes during that 76-ball knock to eclipse his own record of 156 against England in Southampton, which had won him the same award for the year 2013-14. The knock in Harare was the second highest in all T20 cricket and his 26 boundary hits the most in a T20I innings.

Aaron Finch, remembering the knock, said: “It was just one of those days that things seemed to go my way, so it was nice to break my own record and get a 172. After I got a hundred and I started to middle consistently, that is when I knew it was going to be a big one. It all happened pretty quick.”

Left-handed Pant produced some fine knocks during the voting period and getting off the mark in Test cricket with a six only highlighted his potential. He scored 537 runs with a century and two fifties in eight Tests during the voting period with 40 catches and two stumpings. In three ODIs, he scored 41 runs and took three catches and in eight T20Is scored 114 runs and pouched two catches.

The year 2018 in Associate cricket belonged to Scotland whose stunning six-wicket victory over England in June cemented the biggest win in their history. Other highlights also included a very impressive campaign at the ICC Cricket World Cup Qualifier (CWCQ), narrowly missing out on qualification as well as winning the Euro T20 series against Netherlands and Ireland without losing a match.

Calum MacLeod’s imperious 157 not against Afghanistan at Bulawayo at the CWCQ and his match-winning 140 not out against England were two of international cricket’s most impressive batting displays of the year. The ICC Voting Academy clearly agreed with MacLeod receiving the second highest number of votes across all the individual awards.

MacLeod said: “It is a huge honour to win the ICC Associate Player of the Year award. It has been a really special year for me personally. I thank the ICC, Cricket Scotland, my team-mates and all the fans to making it a year I won’t forget.”

The Spirit of Cricket Award is nominated for by ICC Match Officials with the ICC CEO selecting the winner. Kane Williamson was nominated for his continued commitment to playing the game in the right spirit and as a role model to the whole sport.

Williamson said: “We are all ambassadors of this game, so playing in the right spirit, those sorts of characteristics are really important even at the highest level. It is a nice award. It is important for us as a group that we keep looking to do better in all areas, and one of those areas is to continue playing the game in the right way, as how we see it being right.”

Meanwhile, India winning the ICC U19 World Cup in New Zealand has been voted as the Fans’ Moment of the Year with 48 per cent of the votes. Afghanistan’s miracle comeback at the ICC Cricket World Cup Qualifier came in second with 36 per cent votes.

ICC ANNOUNCES MEN’S TEST AND ODI TEAMS OF THE YEAR

The International Cricket Council on Tuesday announced the men’s Test and ODI teams of the year with Virat Kohli named captain of both sides following a remarkable 2018 as batsman and skipper.

The awards, which honour performances during a calendar year, saw the India captain Kohli walk into both sides which were selected by the ICC Voting Academy* comprising former players, members of the media and broadcasters.

Kohli’s 1,322 runs at an average of 55.08 with five centuries in 13 Tests and 1,202 runs at an astounding average of 133.55 with six hundreds in 14 ODIs saw him selected to both sides by every voting member of the Academy with the majority of them also opting to name him at the helm of each.

India won six Tests and lost seven during the voting period that ran from 1 January to 31 December 2018 and included victories in South Africa, England and Australia, as also some other close matches in away series. In ODIs, Kohli led India to nine victories, with four losses and one tied match.

India captain Virat Kohli said: “It has been an amazing year. I was able to play in a manner that I would not have imagined. If the intention is right and you keep working hard, the results are there in front of your own eyes. The intent has always to be helping your team at any cost, that is when these performances come by and you are pushing yourself to the limit, which you otherwise will not be able to. That is something I experienced in 2018 a lot.”

New Zealand skipper Kane Williamson said: “This looks like an individual piece of recognition but it is much more about the team. Both of the other two who have been fortunate enough to be named in the eleven, I am sure, would agree that as a group we have been growing for a period of time – as a Test unit. It is great that the guys have been looking to play their roles as best as they can. The Test team has been tracking nicely.”

Joe Root said: “It feels really great to be named in the ICC ODI squad and the fact that three of my team-mates are there along with me, makes it extra special. We had a fine year and expectations are on the rise as we look forward to playing the ICC Cricket World Cup at home this year. I thank the ICC for the honour and to the jury for taking the effort to go through the elaborate process.”

ICC Men’s Test Team of the Year (in batting order):

ICC Men’s ODI team of the year (in batting order):

Not only is Kohli the first player to win these three major ICC awards together but he has also been named the captain of the ICC Test and ODI teams of the year for a fabulous run in international cricket. Kohli scored 1,322 runs at an average of 55.08 in 13 Tests with five hundreds during the calendar year while in 14 ODIs he amassed 1202 runs at an astonishing average of 133.55 with six centuries. He also scored 211 runs in 10 T20Is.

The 30-year-old from Delhi, who first came into limelight when he led India to victory at the ICC U19 Cricket World Cup in Malaysia in 2008, finished the year as the top-ranked batsman in Tests and ODIs. The highest scorer in both forms of the game in 2018, he was one of only two batsmen to score more than 1,000 runs in Tests and only among three to do so in ODI cricket.

Kohli said: “It feels amazing. It’s a reward for all the hard work that you do throughout the calendar year. I feel really grateful and very, very happy with the team doing well at the same time myself performing. Having recognition at the global level from the ICC is something you feel proud of as a cricketer because you understand that there are many players playing the game.

“To be rewarded in this manner from amongst all of them is obviously a very proud moment for me and something that gives you more motivation to keep repeating the same things because you have to keep the standard of cricket up and keep bringing in consistent performances. From that point of view, these awards give you that extra motivation.”

ICC Chief Executive David Richardson praised Kohli: “Sincere congratulations to every one of our individual winners and those players named in our ICC Test and ODI teams of the year. Special mention must go to Virat Kohli, who becomes the first ever player to win the Sir Garfield Sobers award along with Test Player of the Year and ODI Player of the Year and be named as captain of both teams.

“This is well deserved recognition for an extraordinary talent. His regard for the game and particularly for Test cricket is also recognized and appreciated. He is passionate in his support of the longest form of the game and its continued importance. To be recognized as a true cricketing great you need to be successful at all formats of the game and Virat has become a great ambassador for our sport.”

September 24, 2018 byRevatha No Comments
I'm willing to take part of the blame but at the same time, feel betrayed and let down if the blame is solely put on me. As you know all decisions are taken through a mutual understanding ...