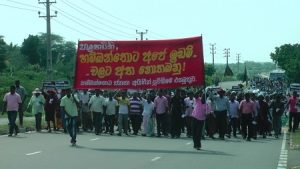 The Government has been accused of attempting to acquire private land in the Hambantota District to implement various projects.

All Ceylon Farmers’ Federation National Organiser Namal Karunaratne told The Sunday Morning that the Government was making plans to hand over plots of land to a foreign company to be used to grow cocoa beans.

He added that there had been public protests against the handing over of this land to foreign companies for agricultural purposes and other activities.

“The land in question is a plot of land in Tissamaharama, Hambantota. Minister of Ports and Shipping and Southern Development Sagala Ratnayake had been personally looking into the matter and had prepared a cabinet paper to be approved to conduct a feasibility study on the plot of land,” he claimed.

Karunaratne stated that the Southern Development Ministry had allegedly agreed to hand over the land to an Israeli company to cultivate cocoa. Karunaratne accused the Government of taking away the land of the people; allegedly, plots of land with 1,500 houses.

“The cabinet paper presented by Minister Ratnayake seeks approval to extend the already-commenced feasibility study of the cultivation of cocoa on this plot of land by a further six months. The land is currently occupied by Sri Lankans and utilised by farmers who are currently cultivating their crops,” he iterated.

He further added that the Government was conducting similar activities across the island, where they reclaim land from the people and distribute it to foreign companies for agricultural use and cultivation.

“A similar project is currently being conducted in Mayurapura, Hambantota where arrangements have been made to hand over more than 500 acres of land to a Chinese company for unspecified purposes,” Karunaratne commented.

Better use for land

When contacted by The Sunday Morning, Board of Investment (BOI) Director General Champika Malalgoda stated that the board was unaware of any foreign investments of this sort.

Malalgoda explained that if the project was being handled by a Government official, the investment would not come under the purview of the BOI.

The Sunday Morning also spoke to the Ministry of Resettlement, Rehabilitation, Northern Development, and Hindu Religious Affairs to confirm if any resettlement programme was underway to compensate the people for the losses they have to incur.

Ministry Secretary V. Sivagnanasothy told The Sunday Morning that presently, under schemes such as “Gamperaliya” and other projects, the resettlement of peoples was taking place across the island.

However, he stated that no specific programme was in place to compensate the people who were allegedly being displaced due to the projects in Hambantota.

When The Sunday Morning spoke to Minister Sagala Ratnayake to clarify these claims, the facts presented by the Ministry were different to what was explained by the National Organiser of the All Ceylon Farmers’ Federation.

Ratnayake said that his Ministry had no plans to hand over the land to a foreign company.

“At the time, we felt the land that was always under the ownership of the Government was being underutilised and poorly maintained and therefore, I instructed the Southern Development Authority to conduct a feasibility study to better understand what crops could be cultivated on this land.”

The Minister added that the study was conducted specifically on the land which was not being utilised, and the land which had been allocated for housing would remain untouched.

Ratnayake iterated that presently, there were no plans to hand over this specific plot of land to a foreign company, stating: “Instead, we hope to re-evaluate the uses for the land, to understand better if this area could be used for the benefit of the people in the region by cultivating a high-yielding or more profitable crop which would then allow the farmers in these regions to earn higher wages.”

Ports and Shipping and Southern Development Ministry Secretary Admiral S.S. Ranasinghe (Retd.) added to the Minister’s statement, commenting that presently, there were no issues in this region.

He added that the various projects are carrying on without any threats from the people in the region as the land on which these projects were being carried out was currently publicly owned.

“As the lands are owned by the Government, the Ministry is not required to provide any compensation. However, we advise those individuals who have issues with these projects to come forward and explain their problems to the Ministry, so that they could find a suitable solution.”

However, Ranasinghe reiterated that currently, only a feasibility study was ongoing at the property in Tissamaharama, with the intention of using the land in a more profitable and beneficial manner.

Mullikulum residents far from being settled

March 26, 2019 bythemorninglk No Comments
After the civil war that lasted for three decades, the people of Mullikulum were expecting to return back to their village and back to their own land. Unfortunately, this is far from the truth.

January 5, 2020 bySarah Hannan No Comments
The Ministry of health is to introduce a label to indicate sugar, fat, and salt content for solid and semi solid foods and will implement strict regulations on food outlet hygiene.