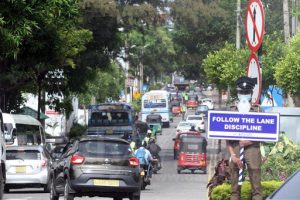 The implementation of the lane law has been a successful step towards maintaining discipline in the busy roads and has produced more positive results than negative, Colombo DIG B. R. S. R. Nagahamulla told the Morning today (16).

“The lane law was introduced by the government to maintain decorum in the roads as well as reduce the traffic during the rush hours. Although we have received multiple complaints regarding the increase of time due to traffic, we have seen positive results with regard to maintaining discipline in the roads. The implementation of the lane law has not produced any accidents and bans the crossing of lanes brashly,” he commented.

He noted that most complaints had been lodged by three-wheel drivers and motorcyclists and explained that it was because they were more likely to cross lanes in an unmannerly way, resulting in more accidents. He believes that with proper time management, the public can utilize the lane law to their advantage.

The bus priority lane had been reintroduced in Colombo and suburban areas with the intention of reducing traffic congestion with effect from Monday (14).

US reimposes sanctions against Iran

September 21, 2020 bythemorningeditor1 liberty No Comments
Secretary of State Mike Pompeo said Saturday (19) evening that the US has reimposed United Nations (UN) sanctions against Iran, a move expected to be effectively ignored by global allies and adversari