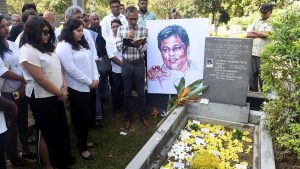 Investigations into the murder of journalist Lasantha Wickrematunge have reached a crucial stage with the main suspects left to be identified, The Sunday Morning learnt.

Sources at the Criminal Investigations Department (CID) revealed that the investigations had been progressing but stalled following the Easter Sunday attacks and other ongoing investigations.

CID sources said that the three-part investigation looked into the murder, misappropriation of funds, and the concealing of evidence.

Investigations into misappropriation of funds and concealing evidence related to the murder have already been completed and reports have been submitted to the Attorney General (AG), The Sunday Morning learnt.

Investigations to identify the main suspects over the murder have however stalled as it was being conducted parallel to the investigations into the attacks on Editors Upali Tennekoon and Keith Noyahr.

The 21 April attacks also affected the progress of the investigations as some of the main investigators involved in the Wickrematunge murder probe had been assigned to investigate the Easter Sunday attacks.

Last week, the AG had instructed Acting Inspector General of Police C.D. Wickramaratne to expedite and complete the investigations and submit reports on four separate high profile cases including the assassination of journalist Lasantha Wickrematunge, the murder of Rugby player Wasim Thajudeen, the killing of 17 NGO workers in Muttur, and the abduction and assassination of 11 youths from Colombo and the suburbs.

CID sources said that further investigations into the abduction and assassination of 11 youths from Colombo would be carried out following the recording of statements from former Navy Commander Wasantha Karannagoda.

September 10, 2019 byTSM Web Desk No Comments
Parliamentarian Palitha Thewarapperuma has been remanded until 16th of September for forcibly burying a body at an unauthorized land, disregarding a court order.