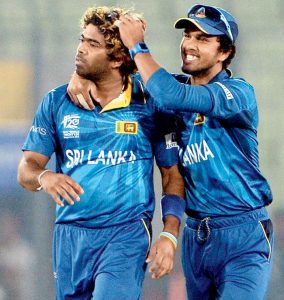 The SLC officials have asked Lasith Malinga to reduce weight if he is to continue as the captain of the Sri Lanka T20I team for the future series, it is learnt.

Malinga has fared poorly in the recent past and has been accused on many occasions for disrupting national team’s unity.

He has been asked by the coaching staff to reduce 10 kg of body weight if he is to remain Sri Lanka’s skipper for the shortest format, SLC sources revealed.

If he is to lose captaincy, he is likely to miss out on having a place in the Sri Lanka T20 playing eleven, it is also said.

The authorities are not overtly happy about his performances during the last couple of series where he was captain. There was hardly any contribution from the ace fast-bowler during the last four T20I series Lanka played under him. They lost all of them (see following stats).

It was further said that Malinga needs to be fit if he is to play West Indies who will be here next month for a T20I series. The T20 World Cup will be staged in Australia in October and Malinga has expressed his willingness to play till then. He has already retired from Test and ODI cricket.

Lasith Malinga has become a liability. Always a match-winner, darling of Sri Lanka’s new-wave cricket fans, and the most talked-about fast bowler of our time is being desired, at the same time undesired too! The dark side of the goldilocked poster boy’s attitudes in the big league came up, on and off in the media, particularly after he led Sri Lanka to the 2014 ICC T20 World Cup victory in Bangladesh. The way the disappointing plot had been hatched during the series to dispel Dinesh Chandimal from the captaincy was highlighted in the media raising many eyebrows. After 2016 February he didn’t captain Sri Lanka in the T20Is until January 2019 when Malinga again replaced Chandimal for a tour of New Zealand. Since then Sri Lanka played 13 T20Is losing 11 of them. They won only one of them with one match ending in no result.

September 22, 2018 byRevatha No Comments
India now have an unassailable 2-0 lead in the T20I series, with two matches to play. They had won the ODI series 2-1.