Lean on me – A collaboration of epic proportions, today at 9.30 p.m.

June 30, 2020 by Dimithri Wijesinghe No Comments

“Lean on me” is a collaboration of epic proportions courtesy of PodHub and Funtime, that have come together to present this virtual music video today at 9.30 p.m. on https://podhub.lk/.

The virtual music video is set to feature 80 unique artistes, both young and old, who have come together to pay tribute to those in the essential services who have worked tirelessly to contain the virus.

PodHub Chief Executive Officer and Co-founder Shaq shared with The Morning Brunch that the idea came about during a casual conversation that he and Funtime Managing Director (MD) Imran Saibo, who is currently residing in Australia, had with regards to how the entertainment industry has come to a virtual standstill during these times.

Shaq said that it was almost at a point where even the entertainers who have been around forever were now “out of sight, out of mind” and shared that it simply needn’t be so.

He stated that they thought up the idea and proposed it to a few artistes to test the waters, and were pleasantly surprised when almost everybody immediately came onboard and wanted to be a part of it. Following this, the project began to pick up pace.

The sheer number of entertainers who came together is quite extraordinary. “It was this crazy idea and now we are sort of stuck with it,” said Shaq.

We also spoke to Imran, who said that he was initially reluctant, as it is a monumental task they were trying to accomplish; that while it sounded like a great idea, as things went on, they may come to realise that they’ve bitten off more than they can chew. However, he said that the timing was right – everyone has felt the effects of Covid and we are all stuck and in one place; if there ever was a time to do it, it was now. 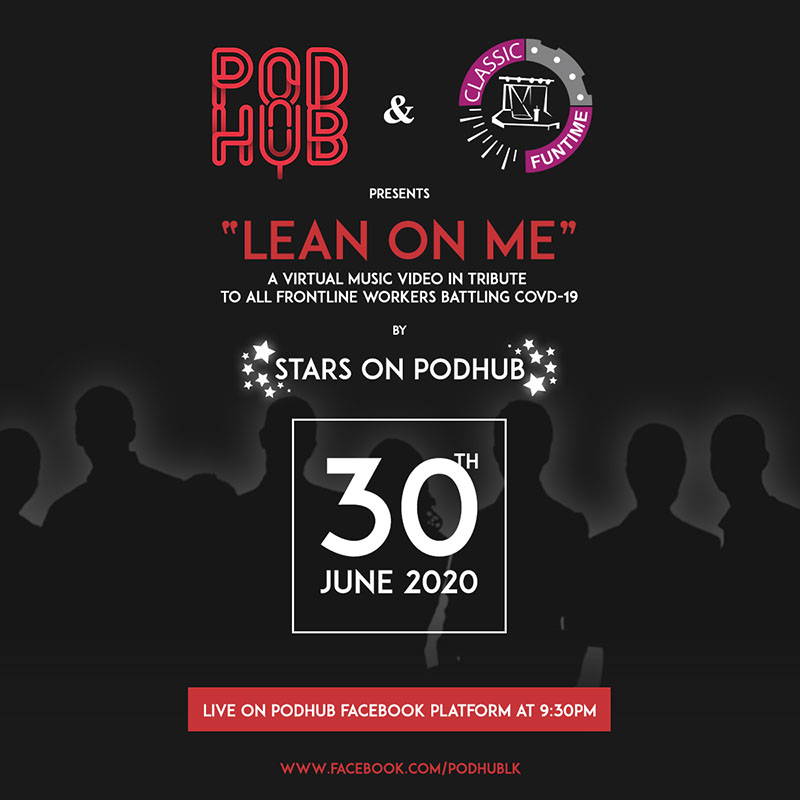 He said that the song in itself is very current and relevant to the present situation we live in. Put together entirely by PodHub Co-founder Azlan Sheriffdeen, who is a music producer, both the audio and video will be edited together.

Imran stated that the project posed complexities at many levels, especially the fact that they will be bringing together artistes of multiple genres – western, eastern, and those who cross the divide. While it posed a challenge, it also allowed them to create a performance in all three languages – Sinhala, Tamil, and English – featuring multiple genres, adding variety to the production.

He also added that everyone who participated in the project was doing it out of passion. They put their heart and soul into it and they did not get paid. There are no sponsors involved in the project. “We did not want the complexities that come with involving sponsors,” he said, adding that while money was being spent on miscellaneous expenses, these were all borne by the parties involved; it is purely a passion project to pay tribute, he said.

Speaking about the process itself, Shaq shared that one of the most unique details about the project was the fact that the artistes were able to record the entirety of their parts in their home studios and only those who were unable to do so remotely were invited into the studio once the curfew was lifted. Therefore, despite having an incredibly diverse number of artistes taking part, not one of them came into contact with each other during the entire process.

Shaq shared that this unique element of the process was also one of the most challenging aspects, as it posed an immense challenge for Azlan, who was editing everything together, as he was dealing with nearly 75% of prerecorded content. Having to render a cohesive product whilst dealing almost entirely with voice clips was surprisingly challenging; for a regular production, you would have the artiste in at the studio to record and if you were unhappy with the output, you can simply have them rerecord that part. However, here, he was faced with the additional challenge of creating something from existing content, all of which came from individuals with their own unique styles.

He shared that while it was a challenge and it was a new thing they were trying to do, things were made relatively easy due to the pre-existing working relationship they had with many of the artistes. “We had worked with almost all of these artists before,” he said, and so it was rather smooth sailing.

He stated that while they would have preferred to have as many people as possible on board, as at one point they already had a hefty number of participants, they chose to work with the ones they had already brought together at the time. As for the dedication of each artiste, he said they gave it their all, adding that as they only had to record certain parts of the song, it was made somewhat easier in that the artistes only needed to focus on perfecting a chosen part of the overall project. However, they were all highly dedicated and did their best.

About the video aspect of the project, Shaq said that they did not in any way want to create something that looked like it was heavily or overly produced. They wanted to keep it in its raw form and use the video clips recorded on the artistes’ mobile phones as is. He said that the primary idea behind this was to showcase the fact that there need not be stages, arenas, or public gatherings to enjoy music; that it can thrive, even at a time like this. Therefore, they wanted to hold on to that authentic, raw feel of the video and to put it together in a way that communicated this essence.

We also asked Shaq about PodHub’s involvement in this project as a predominantly auditory medium. He shared that they’ve chosen to release a music video instead of a studio reordered audio track, stating that while it is true that podcasts primarily consist of audio only, video podcasts are not unheard of and especially with the Covid-19 pandemic, many platforms are somewhat required to tweak their spaces to accommodate a variety of audiences. Shaq said that while the audio-only podcasts have their own audience, there is a large consumer base for the visual medium.

He stated that many platforms were changing, a sign of the times if you will; food delivery applications were adapting to provide groceries, which was something they did not do prior to the pandemic. Not unlike these other platforms, PodHub too was looking to expand on their content, he said, and so they have been gradually including videos and visual content on their website as well.

Some of the artistes set to be featured at the event include a number of veteran acts like Sunil Perera of The Gypsies, Nalin Perera of the Marians, and Corrine Almeida. They also called in some contemporary artists like Ashanthi, Dushyanth Weeraman and Stephanie Siriwardhana, Ashane (Infinity), Romaine Willis, Shiraz, and a number of others. Also contributing to the 80 individual voices featured will also be multiple group acts like the wonderful ladies of Soundarie David Rodrigo’s Soul Sounds, Voice Print, and even the “First Ladies”.

It was a whirlwind of a project, said Imran, jokingly sharing that if Shaq were to present to him something like this ever again, it would receive a resounding “no” from him.

They have managed to accomplish something they are proud of and are hopeful that it will be received well.

September 6, 2018 byJennifer Anandanayagam No Comments
A recent news story making its rounds since Monday shed some light on the deplorable plight that has befallen Kalana - the elephant of the Vishnu Devale in Devinuwara.

Working together to prevent suicide on World Suicide Prevention Day

September 4, 2020 byNaveed Rozais No Comments
On 10 September, join Sumithrayo and support the prevention of suicide. Light a candle near a window at 8 p.m. on WSPD as a symbol of support for suicide prevention.