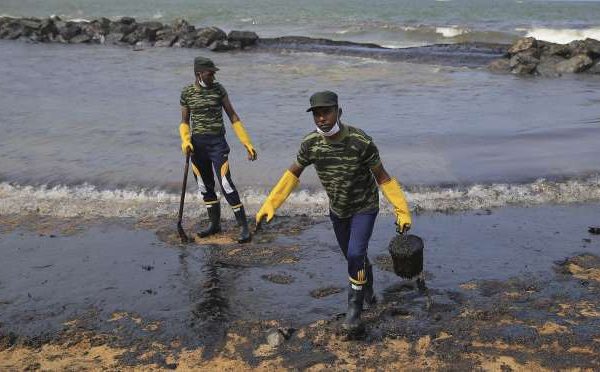 Sri Lanka’s ageing and leaking pipelines are wasting tonnes of oil each year, causing widespread environmental damage that largely goes unreported and the Ceylon Petroleum Storage Terminals Ltd (CPSTL) is now being threatened with legal action demanding compensation for the environmental damages caused due to the leaking oil pipeline.

The experts say the problem is getting worse as Sri Lanka battles against increasing oil prices and continued to depend on more, costlier refined petroleum products because of low output at the Sapugaskanda refinery, at a time when its pipelines need urgent repairs or replacing altogether.

Last Saturday, a leakage in a fuel pipeline from the tankers to the Muthurajawela Oil Refinery Complex was reported in the Uswetakeiyawa area. The leakage has resulted about a 1.5 nautical mile oil spill and the officials believed that around 25 metric tonnes of furnace oil had been leaked into the ocean from 31,000 metric tonnes of crude oil shipment arrived from Port of Fujairah in the United Arab Emirates while it was being unloaded.

The total financial loss due to the leakage was yet to be assessed by the authorities.

As soon as the leakage was observed, the military personnel were pressed into action to minimise the environmental damage. The oil removing efforts are being currently carried out by Sri Lanka Coast Guard (SLCG) in coordination with the Navy and the Army with the support of Ceylon Petroleum Corporation (CPC), Ceylon Petroleum Storage Terminals Ltd (CPSTL), Marine Environment Protection Authority (MEPA) and the Coast Conservation Department (CCD).

The experts say, “Spills often occur because of the bad conditions of the pipelines.”
They say that in Sri Lanka “hundreds of miles” of oil pipelines are still in use many years after their recommended lifespan has expired.

The Jathika Sevaka Sangamaya (JSS) Petroleum Branch General Secretary Ananda Palitha said the reason for the recent oil spill in Uswetakeiyawa was the low quality pipelines which were brought down by the previous Government.

“What is being used currently is a pipeline of low quality which is not even up to international standards and was brought down by the previous government,” he reiterated.

Palitha said if the internationally recognised Dunlop or Bridgestone type pipelines were used, this problem would not have occurred.

“Since 2010, a substandard pipeline has been in operation. Why the administrators of the CPC used a substandard pipeline when they are aware of products of higher standard, is the question,” he said.
For past few years there had been eight incidents of bursting of pipelines,and, in some occasions it has severely affected the environment as well as the CPC had to incur heavy losses as demurrage cost for the ships, Palitha stressed. Out of five pipelines which we have used decades ago, only two are being used by the CPSTL at present, he said.

JSS General Secretary noted that 90 percent of the work of laying new pipeline from Bloemandhal to Kolonnawa which carry refined oil has already been completed and the rest would be completed at the end of this year.

“The pipeline which caused the recent oil spill in Muthurajawela is eight years old and it had only six year warranty. But we used the international standard Dunlop for about 20 years after the warranty period was over, he stressed.

The unionist stressed that the 50 year-old Sapugaskanda refinery which had a daily output of 50,000 barrels producing a mix of diesel, kerosene, gasoline, furnace oil and naphtha was currently operating at a very low capacity.

If the refinery works at its maximum capacity, the CPC would not have to incur heavy losses and spend money to bring refined petroleum products, Palitha said.

The real issue with the delay in refurbishing the country’s only refinery was that the CPC couldn’t obtain loans from any international bank due to the hedging issue, Palitha said adding that in 2002 the estimated cost for refurbishing the refinery was only USD 18 millions but now would cost around USD 69 millions.

The oil leak would not only cause financial losses but it will damage the marine environment as well. As the cleaning process is still continuing, the environmentalists claimed hundred percent of the spilled oil would not be cleared and therefore the leaked oil will remain in the nearby lagoon, in the mangroves, damaging the ecologically-rich Muthurajawela.

Marina Environment Protection Authority (MEPA) says it’s still too early to know how the oil spill will affect wildlife and the marine environment but long-term monitoring will be needed.

“It will take another three or four years to overcome the environmental damages. The large scale animals had enough time to run away from the area but it will definitely affect the fishermen,” he said.

Environment Conservation Trust (ECT) Director Sajeewa Chamikara said the spillage had already caused catastrophic damages to marine and plant life, the effects of which could linger on for years with devastating results.

“It is an ecological, environmental and economic disaster and it will take the mangroves at least three to four years to recover from this disaster, possibly more,” he said.

With the destruction of feeding grounds and habitats comes irreversible damage, Chamikara said. “It would take many years to recolonise, maybe decades.”

He stressed that the patches of mangroves were the most vulnerable shoreline habitat to spills and it would destroy the home of shrimp, fish and marine birds. Their loss also would negatively affect the fishing industry.

The MEPA General Manager said it will sue the CPSTL next week demanding compensation for the environmental damage caused by the Muthurajawela oil spill.

He said the expert team involved in damage assessment was expected to hand over its report next week and the MEPA would proceed to file a court case once this report is submitted.

“We are now in the process of collecting all documentation and reports needed to initiate legal action against the CPSTL, a subsidiary of the CPC,” he added.

CPC Chairman Dhammika Ranatunga told the media that the corporation had not yet assessed the economic impact of the oil spill because they had been engaged in minimising the environmental pollution and repairing the damaged pipeline.

He said the CPC was facilitating repairs of the pipeline and controlling further leaks with assistance from the MEPA, Sri Lanka Navy, Sri Lanka Air Force, and Sri Lanka Army.

August 5, 2020 byTSM Web Desk No Comments
Numerous candidates are continuing to run ads on Facebook despite the campaigning prohibition on Election Day, according to the Centre for Monitoring Election Violence (CMEV).

July 23, 2020 byTSM Web Desk No Comments
The Cabinet of Ministers has approved a proposal by Prime Minister Mahinda Rajapaksa to appoint a committee of experts to formalize and drive efficiency in state banks.