LGBTIQ rights and the law: Where does Sri Lanka stand?

June is Pride Month, when lesbian, gay, bisexual, transgender, intersex, and queer/questioning (LGBTIQ) communities across the world hold events that celebrate and affirm different sexual orientations, gender identities, and gender expressions. Like all global events post pandemic, Pride is being celebrated in a quieter, more reflective manner this year. And although there are no parades or gatherings this year, the message of Pride, that of equality and acceptance, has never been more relevant.

LGBTIQ persons all over the world face harassment and discrimination of some level every day, be it from friends and family, people in the workplace, the general public or law enforcement and other figures in authority. This harassment and discrimination can leave LGBTIQ persons feeling powerless, trapped in a system that feels stacked against them. 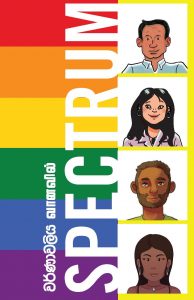 With each of the four stories illustrated by different artists, the comic book painted a visual picture of how four LGBTIQ persons were harassed, discriminated against, or intimidated, and highlighted how everyday situations can become traumatic situations. The end of each story in Spectrum featured information on how such discrimination, harassment, or intimidation could be fought on a legal level, citing international covenants, conventions, and declarations which Sri Lanka has agreed to, that do not permit harassment, discrimination, or intimidation of any individual, regardless of their LGBTIQ status.

Spectrum highlighted the fact that there are legal protections afforded to all Sri Lankan citizens including LGBTIQ citizens and that there were methods to push back against discrimination and harassment. Spectrum also highlighted that awareness on the law was lacking, both among the general public and LGBTIQ persons themselves.

The 2019 booklet “My Rights, My Responsibility”, published by EQUAL GROUND, Sri Lanka’s leading advocate of political and human rights for LGBTIQ individuals in the country, highlighted the same themes, providing comprehensive information on the rights of all Sri Lankan citizens and how to recognise and respond when these rights were violated.

Where does Sri Lanka stand legally with LGBTIQ rights?

In 2014, the Attorney General (AG)’s Department of Sri Lanka stated: “Article 12 of the Sri Lanka Constitution recognises non-discrimination based on the grounds of race, religion, language, caste, sex, political opinion, place of birth, or any one of such grounds as a fundamental right. This measure protects persons from stigmatisation and discrimination on the basis of sexual orientation and gender identities.”

This is a statement that has been repeated every year since, and emphasises equal treatment for LGBTIQ persons under the law, particularly from the Police and law enforcement. In practice, the legal implications and interpretations concerning LGBTIQ rights and relations in Sri Lanka take root in Sections 365 and 365A of the Penal Code, established in 1883, under British colonial rule.

Section 365 prohibits “carnal intercourse against the order of nature with any man, woman, or animal”, going on to list punishments for those found guilty in violation of this section.

Section 365A prohibits the public or private commission and/or procurement of “gross indecency with another person”.

The Sunday Morning Brunch reached out to Attorney-at-Law Aritha Wickramasinghe for further insight on the applications and interpretations of the law concerning LGBTIQ persons. Wickramasinghe also serves as the Equality Director of iProbono, an international network of lawyers that provides access to people who are denied or cannot afford justice. 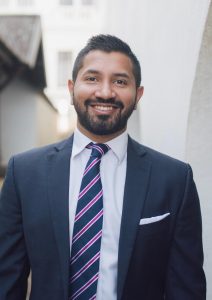 India made history in 2018 when, concerning Section 377 of India’s Penal Code (which is nearly identical to Sri Lanka’s Section 365), the Supreme Court of India commented that consensual same-sex relations were not unnatural, and that science supports the idea that sexuality is something that people are born with and the expression of this sexuality is natural, giving this text new meaning and redefining what was natural and unnatural.

The Supreme Court of Sri Lanka also has the power to comment on Section 365 and whether it interprets Section 365 to include consensual same-sex relations, although it has not yet done so.

Section 365A was originally written to address gross indecency between male persons and was amended in 1995 to address gross indecency between any persons, meaning this is a law that also applies to all sexual behaviour deemed indecent, same-sex or otherwise. It is used to discriminate against same-sex relations because same-sex relations are inherently non-reproductive and easier for law enforcement to pursue.

Much of the harassment and discrimination of transgender persons arises from the misinterpretation of Section 399 of the Penal Code, which refers to “cheating by personation”, that deals with impersonation (the logic for violation of this Section being that transgender persons are impersonating a member of the opposite sex) and the Vagrants Ordinance, which deals with the loitering of rogues and vagabonds (Ordinance No. 4), and acts of indecency or the solicitation of such in a public place (Ordinance No.7).

However, as the Supreme Court has ruled in relation to a recent vagrancy case, these ordinances only apply when the person in question is behaving in a disorderly or riotous manner. 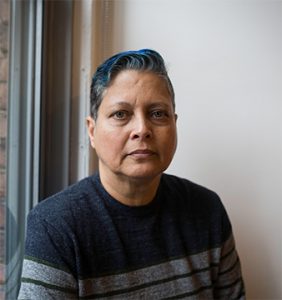 Negligent or malicious arrests for violation of Section 399 or the Vagrants Ordinance constitutes unlawful detention and is a violation of one’s fundamental rights under the Constitution of Sri Lanka.

LGBTIQ rights advocacy group EQUAL GROUND actively campaigns to repeal Sections 365 and Sections 365A. EQUAL GROUND Executive Director Rosanna Flamer-Caldera shared that it is important to have these sections repealed because the fact that they exist gives people, be it law enforcement, judiciary bodies, or general society, the apparent right to discriminate against and marginalise LGBTIQ persons. The public morality aspect of Sections 365 and 365A should not apply to LGBTIQ relations, because LGBTIQ relations are consensual and carried out in private and should not be subject to scrutiny by the State in any way.

The role of stigma in perpetuating discrimination and harassment

In many cases, LGBTIQ persons are afraid to speak up against discrimination and harassment, Wickramasinghe explained. In several cases, even once it is clear that fundamental rights have been violated, the victims are afraid to pursue matters, particularly up to a Supreme Court level because of social stigma and fear of them, their families, and those dear to them being ostracised. 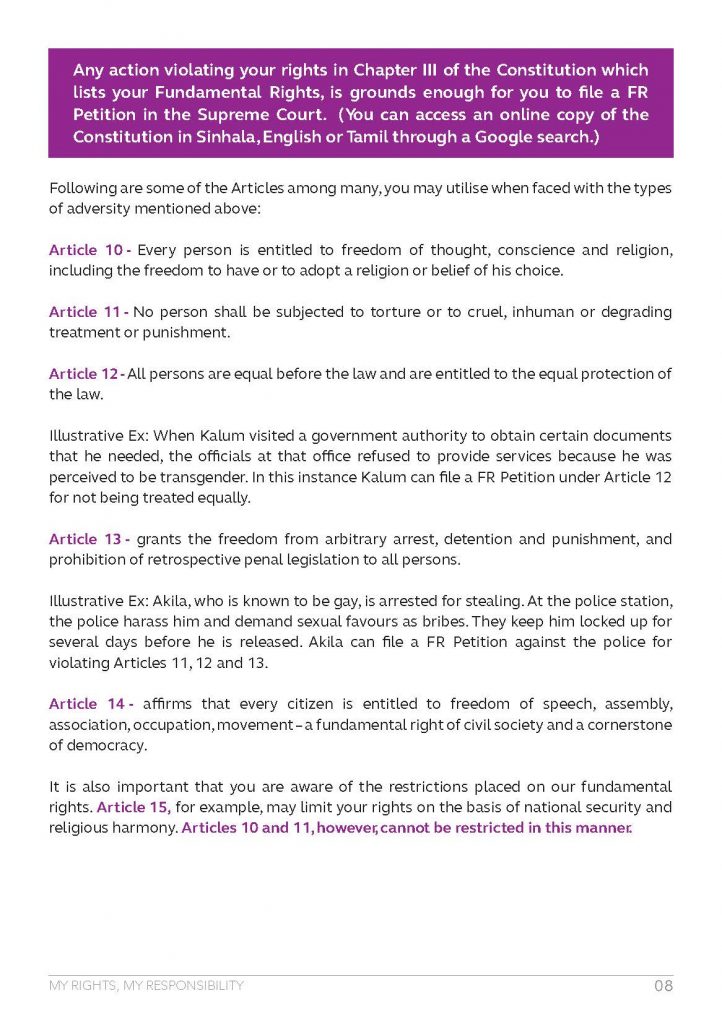 Excerpt from My Rights, My Responsibility, published by EQUAL GROUND

This stigma and the narrative that criminalises sexual orientation and same-sex relations means that lots of LGBTIQ persons live their lives in fear. The enforcement of this criminal narrative by law enforcement and other authority figures and inaction to change this narrative leads to a lack of awareness on the interpretation of the law and one’s fundamental rights, particularly when it comes to LGBTIQ issues.

Responding to LGBTIQ-based discrimination and harassment

Awareness of how the law is misinterpreted and how to fight back against such misinterpretation is key to building a safe environment for LGBTIQ persons.

In the case of wrongful or discriminatory arrests, victims need to ask law enforcement to explain the grounds for arrest, and ask for their lawyers and the right to representation. The Legal Aid Commission is required to provide legal aid for those who cannot afford or find representation. There are other legal resources like iProbono, as well as advocacy groups like Equal Ground who assist LGBTIQ persons in need.

What is most important to remember is that LGBTIQ persons have the same fundamental rights as any Sri Lankan citizen, and based on the nature of the discrimination and harassment faced, there are many ways to seek legal reparation and authorities to appeal to; this includes filing fundamental rights petitions, filing complaints with the Human Rights Commission of Sri Lanka, filing complaints with the National Police Commission, and in specific cases, appealing to the Supreme Court of Sri Lanka.

Flamer-Caldera also commented that discrimination and harassment prevents LGBTIQ persons from being contributing citizens because they are unable to feel like part of the community, whereas they should be embraced as full citizens, and not judged or discriminated because of who they love.

Awareness is the first step to building a safe environment for LGBTIQ persons, followed by advocating fair rights and treatment as well as being accountable, on a personal level, and on a broader social level. Knowledge is power.

Young talent to watch out for

August 5, 2019 bythemorninglk No Comments
Elevate together with The Voice by Ishan De Lanerolle presented Rachel Brohier, Aanya Tiwari, and Aaron Pathinather live in concert on 28 July at Access Towers II.