Sri Lanka’s largest beer producer Lion Brewery (Ceylon) PLC has seen its export earnings rise significantly, despite a major loss of overall profits during the first half (H1) of the 2020/21 financial year (FY).

“Whilst business in the local market was adversely affected due to the pandemic, it was satisfying to record a significant growth in exports. Currently, Lion beer is exported to 25 countries, and volumes increased by 19% during the first half whilst profits rose by 32% in this segment of the business,” Lion Brewery said, releasing its interim financials for the second quarter ended 30 September 2020. 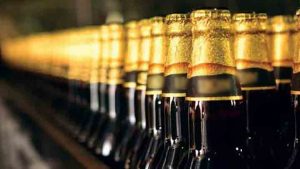 This performance was notwithstanding the slowdown in tourism in the Maldives – a sizable market for Lion beer exports – during this period. Lion Brewery claims a dominant leadership position in the Maldives after having overtaken other regional multinationals.

Furthermore, the company noted that all export growth was organic as new markets were not penetrated during H1. The flagship brand “Lion” is exported to several countries including the US, Canada, Australia, the UK, and Japan, apart from the Maldives.

Despite this, the company’s FY 21 first half (H1) profit declined 35% from Rs. 2.8 billion to Rs. 1.8 billion Year-on-Year (YoY) due to the Covid-19 curfew during April and May, resulting in a total stoppage of sales.

“The company ended the first half of the reporting period with a 32% decline in profitability compared to the same period of the previous year. This was the result of the quarantine curfew during all of April and most of May. Since April is a seasonal month, a closure during this period impacts the company’s performance very significantly and is reflected in the 11% decline in revenue during the first half,” Lion Brewery said.

However, Lion Brewery saw its pre-tax profit rise 25% YoY for the second quarter of the financial year 2020/21 after that barren first quarter. The profit before tax (PBT) went up to Rs. 1.79 billion from Rs. 1.43 billion with the country, particularly the Western Province, being opened up following the seven-week lockdown.

The company said that stringent control of overheads during this period helped reduce the impact of the drop in revenue and return “what can be considered a reasonable level of profitability under extremely challenging external conditions”.

The new wave of Covid-19 has the company concerned although it is hopeful that the Government would succeed in containing the spread of the virus soon, helping it minimise financial damage.

“This will no doubt have an adverse impact on results, although its extent will be determined by the length of the quarantine curfew in place currently. The Government was very successful in dealing with the first phase of Covid-19 and we are confident that the current outbreak will be dealt with in a similar fashion, both efficiently and expeditiously. If so, the company’s results – whilst not completely unscathed – will continue to remain at what can be considered reasonable levels under very challenging circumstances,” Lion said.

February 10, 2020 byCharindra No Comments
Bringing businesses into the formal sector gives them opportunity and access to finance, knowledge and markets that they are excluded from in the informal sector. However, businesses...

November 8, 2018 bythemorninglk No Comments
The Stock Exchange must be granted independence and wrested from the control of the brokerages. Only then shall we see new tricks from this old dog. We need another Cesar.