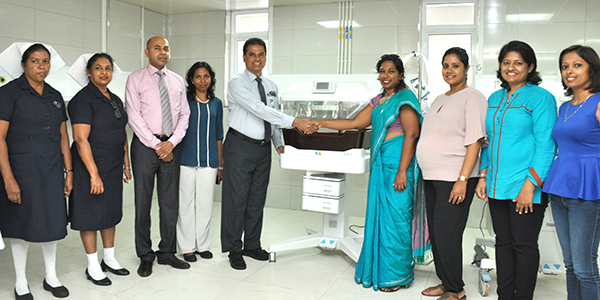 Babies often take us by surprise. Sometimes, they do it by coming into the world too soon, not quite ready to breathe on their own. These babies deserve the best fighting chance for survival and no parent should have to hear the heart-breaking words, “we don’t have an incubator for your baby…”

The ‘Little Lives’ fundraiser was started by four mothers to help ensure that these words no longer have a place at the Neonatal Intensive Care Unit (NICU) of the De Soysa Hospital for Women (DSHW), Sri Lanka’s first maternity hospital.

The DSHW is a tertiary level hospital and many expectant mothers and premature babies from around the country are sent here for specialist care. The improvement and expansion of its neonatal units is a high priority requirement for the hospital staff.
The new building of the hospital was declared open on 13 September by Minister of Health, Dr. Rajitha Senaratne. The NICU and neonatal units are now housed in a modern neonatal centre, enhancing the excellent quality of care already being provided by the staff.

Explaining how ‘Little Lives’ began in May, Thushanthi said, “‘Little Lives’ started randomly. There was a request for diapers for a children’s hospital, for which we started collecting money. However, we were later informed that the hospital had received the necessary requirement. Since we didn’t want the generosity of our donors to go to waste, we checked with those who donated about diverting the money to another project and then looked into other worthy causes.”

Amila added, “I knew Dr. Nalin Gamaathige, one of the consultant neonatologists at DSHW. At an initial meeting, he told us how the neonatal units and the NICU would have more space and modern facilities with the new building that was nearing completion, but there was still a pressing requirement for more medical equipment. ‘Little Lives’ was formalised following this meeting when the team realised that here was an opportunity to make a difference.”

The team started a dedicated Facebook page, ‘Little Lives – Fundraiser for NICU at De Soysa Hospital for Women,’ so that fundraising could be more organised and transparent and so that people would be easily able  to connect with ‘Little Lives’.

The initial aim was to raise Rs. 1.7 million for a neonatal incubator. “We were worried about whether we would be able to raise such a huge amount in such a short period – but then the donations started pouring in!” said Marianne.

Within four months, the ‘Little Lives’ initiative had raised Rs. 3,145,383.28 in monetary contributions.

“This was far in excess of the initial target and ‘Little Lives’ was able to purchase several items vital to the health of newborn babies from the list provided by the hospital’s consultant neonatologists,” said Ashwini.

“Transparency and accountability were key and the team was always open to questions and clarifications,” says Amila. The procurement process was painstakingly coordinated and to help ensure a high level of accountability and transparency, the team opened a dedicated account for ‘Little Lives’ with three signatories operating the account. This account has now been closed since all payments to suppliers have been made.

Each and every piece of medical equipment donated will be officially acknowledged by the Director of the De Soysa Hospital, with some donors already having received their letters from the hospital. The team also ensured that proof that the equipment donated had been entered in the hospital inventory and was shared with donors.

The team is thankful to all those who contributed to and supported the ‘Little Lives’ fundraiser. Says Thushanthi, “I think being a parent yourself helps, as we can imagine the pain and anxiety another parent and family would go through when a precious child’s survival is in doubt. We wanted to lessen that burden, both on the parents and the doctors who do their best but are also dependent on modern and high quality equipment to help them do their job.”

That’s what this little team has successfully done – help lessen the burden on parents and doctors at the De Soysa Hospital for Women and give little ones in the neonatal units the best chance at life!

Celebrating new life: Otara Gunewardene on her visit to Rwanda

September 22, 2019 byThe Sunday Morning No Comments
Rwanda. The country’s name rings with bloodshed, anguish, and the terrors humans are capable of unleashing. Just 25 years ago, Rwanda faced perhaps one of the biggest tragedies ever to occur on planet