The World Poverty Clock, which provides real-time poverty estimates for every country in the world, monitors each country’s progress against ending extreme poverty which is also the first Sustainable Development Goal (SDG) set by the UN. According to its latest estimates for June 2019, Sri Lanka with a population of 22,267,104 only has 0.3% of its people living in extreme poverty. 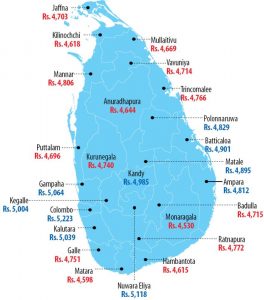 According to the Department of Census and Statistics (DCS) in Sri Lanka, the national average of minimum expenditure per person per month to fulfil the basic needs was estimated at Rs. 4,812 at end-May 2019. The national sample survey is carried out throughout the year for all 25 districts, which is better known as the Household Income and Expenditure Survey (HIES) by the DCS.

While several poverty alleviation programmes have been introduced in the country over the years, we are yet to see a system that is conducive enough to pull these destitute families out of it.

Government relief programmes are targeted at different levels of these families from student aid up to aid for the elderly and the disabled. In between, there are the categories of pregnant women who live below the poverty line, infants from low-income families, undergraduates that are receiving scholarship funds, and orphaned children that are under the care of state-owned or privately owned orphanages.

In the late 80s, the Government had also gone to the length of providing a glass of milk and a meal for children who attended school to ensure that the youth of the country would not be malnourished. Later, this programme was replaced by the food stamps that were given to children as well as low-income families.

As of January 2019, families that qualified to receive Samurdhi relief allocations throughout Sri Lanka amounted to 1,385,516, with the highest amount of beneficiary families registered from the Kurunegala District – 136,436.

Meanwhile, Minister of Primary Industries and Social Empowerment Daya Gamage, commenting on the Samurdhi initiative, said: “A family on average would require Rs. 500,000 per annum to survive on the bare basics. With the Samurdhi initiative having come to an abrupt halt due to various reasons, Prime Minister Ranil Wickremesinghe instructed that we restart this effort through our Ministry yet again to issue the Samurdhi status to qualifying beneficiaries. This year, we will be issuing the Samurdhi status to 600,000 such beneficiary families across the island.”

Gamage also stated that some of these beneficiaries were made to wait for too long to receive the Samurdhi benefit. The Minister also confirmed that he was made aware of the malpractices from some of the officials and have now instructed the law enforcement authorities to attend to any such complaints made by the potential beneficiaries in order to prevent such acts.

While the Samurdhi scheme is still in an active status, President Maithripala Sirisena launched a separate programme under the Grama Shakthi People’s Movement in May 2017. By the end of 2018, under the said movement, it was reported that 1,031 Grama Shakthi associations which comprised of 712 community-driven associations and 319 production and services associations were registered at the Department of Company Registrations.

Each of these associations had then received grants of up to Rs. 1 million based on the requirement with Rs. 994 million disbursed in total under which each divisional secretariat division received Rs. 33 million.

While the Samurdhi programme focuses more on empowering self-employment to its beneficiaries whilst fulfilling their bare basic needs, the Grama Shakthi programme seemed to be more focused on empowering the small-scale entrepreneurs to supply established corporate companies. The two programmes seemed to be taking two different paths to empower the low-income families and eliminate poverty in Sri Lanka, and the country is yet to see the impact it would make in these people’s lives.

A family on average would require Rs. 500,000 per annum to survive on the bare basics. With the Samurdhi initiative having come to an abrupt halt due to various reasons, Prime Minister Ranil Wickremesinghe instructed that we restart this effort through our Ministry yet again to issue the Samurdhi status to qualifying beneficiaries. This year, we will be issuing the Samurdhi status to 600,000 such beneficiary families across the island