Army Commander Lt. Gen. Mahesh Senanayake, in his testimony during the sittings of the Parliamentary Select Committee (PSC) probing the Easter Sunday terror attacks, said that there was a possibility of a lone wolf-type attack while former Minister Rishad Bathiudeen revealed that former President Mahinda Rajapaksa and former Ministers Prof. G.L. Peiris and Piyasena Gamage had known Mohamed Yousuf Mohamed Ibrahim, the father of two suicide bombers involved in the Easter attack. 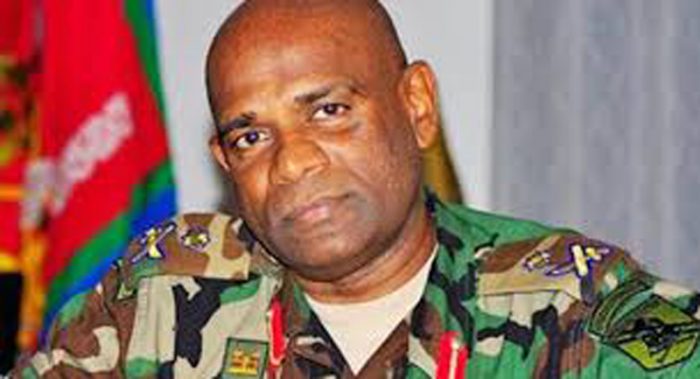 Army Commander Lt. Gen. Senanayake, testifying before the PSC on Wednesday (26), said that while the terrorist threat had been contained, it had not ceased and no one should claim otherwise.

“We have been able to contain the terrorist threat to a large degree, but that doesn’t mean it’s over. No one can say that there is no threat. That is incorrect. There is always a possibility of a lone wolf-type attack,” the Army Commander said, adding that next time it might not be explosives and guns, but vehicles, knives, water, or fire instead – all of which could be used by terrorists to carry out attacks and kill a similar number of people.

When PSC Chairman Deputy Speaker Ananda Kumarasiri questioned the Army Commander on allegations that former Minister Rishad Bathiudeen had exerted influence to release a suspect, the Army Commander said such reports were untrue. The dialogue that transpired is laid out below.

Kumarasiri: There were reports that you came under the influence of Minister Rishad Bathiudeen to release some terror suspects. Is that true?

Senanayake: No one has influenced me to release any one in custody over terrorism charges.

Kumarasiri: But he had called you and inquired of some terror suspects.

Senanayake: Yes, he called me thrice to inquire about a suspect by the name of Ahmed. Soon after the Easter Sunday attacks, the Minister called me and asked whether we had in custody a suspect by that name. I told him that I have no information but I could check and let him know. When he called the second time too, I did not have the information. The third time, I had the information and I confirmed the Minister that there was a terrorist suspect in our custody by that name and he was taken in from Dehiwala, and I told him to make inquiries again in one-and-a-half years.

Field Marshal Sarath Fonseka: How did you know that the person in custody had links with extremists?

Senanayake: There was a network of them and we had information that he was involved.

Thereafter, Minister Ravi Karunanayake queried as to whether the intelligence units had become vulnerable due to its members being arrested on various charges over the past few years. The Army Commander responded in the negative.

“There could be some impact, but stating that such actions would lead to the collapse of the intelligence mechanism is wrong.”

Industrial Development Board Chairman P.M.U. Rathnayake, who was next in line to provide evidence on Tuesday, said that President Maithripala Sirisena had facilitated the provision of empty brass shells to Colossus (Pvt.) Ltd., the company owned by Yusuf Mohamed Ibrahim, the father of two of the bombers, who is currently in police custody.

Rathnayake said that the President and the Defence Ministry functioning under the President had come forward to facilitate and provide empty brass shells discarded by the Army to Colossus (Pvt.) Ltd. to manufacture non-ferrous metal products such as pipes, profiles, and different types of parts out of copper, brass, and other copper alloys.

When Prof. Ashu Marasinghe asked if Rathnayake had been influenced by anyone to release these shells to one particular manufacturer, Rathnayake responded that they receive many such requests.

However, he confirmed that he received a letter from MP Shantha Bandara, which was sent under the letterhead of the President’s Office, asking for the release of 500 tonnes of brass to Colossus (Pvt.) Ltd. in addition to a request by the Ministry of Defence to provide 100,000 kg of empty brass shells to the same company. Below is the dialogue that took place.

Prof. Marasinghe: Have you been influenced by anyone to release that brass and copper to certain manufacturers?

Ratnayake: We receive many such letters of request, but we always follow the regulations and provisions of the Act.

Prof. Marasinghe: Did you receive such a request from a person by the name of Shantha Bandara?

Prof. Marasinghe then asked the witness to read the letter sent by Shantha Bandara under the letterhead of the President’s Office.

Ratnayake said the letter was signed by Bandara under the designation of Director General of Public Relations, and requested the IDB Chairman to release 500 tonnes of brass to Colossus (Pvt.) Ltd.

Ratnayake said he responded that there wasn’t such a large quantity of brass to be released.

He said he was asked to hand over 100,000 kg of empty brass shells to Colossus (Pvt.) Ltd. by the Defence Ministry through a letter that was signed by Ministry of Defence Senior Assistant Secretary Devika Liyanage.

Minister Dr. Rajitha Senaratne asked: “Are you sure you released those empty shells after pressing them so they could not be reused for terrorist purposes?” Ratnayake responded: “Yes, we get it from the Army only after they press it using a roller.” Fonseka then interjected: “One cannot refill an artillery shell and use it without an artillery gun. For that purpose, they have to get a hold of an artillery gun, not only the empty shells.”

To prove his statement, Bathiudeen presented photographic evidence to the PSC of Ibrahim with Rajapaksa, Wickramanayake, Peiris, and Gamage.

Furthermore, Bathiudeen said that he called Army Commander Lt. Gen. Senanayake following a request made by the father of Ishan Ahmed, who had pleaded with Bathiudeen to find out the whereabouts of his son who had been arrested by an unidentified group. Below is the dialogue.

Dr. Nalinda Jayatissa: There is an allegation that you tried to interfere with investigations into the 21 April terror attacks. You have even called the Army Commander.

At that time, many Muslims had been arrested by the Police and Army. There was a possibility for an unidentified group to commit a crime. So I called the Army Commander and asked whether a person of that name was in the custody of the Army. He told me that he would check and let me know. So I called another time. He had not inquired about the matter then. I called him third time on 28 April and he confirmed that the person was in Army custody. He told me that he would hand him over to the Police. I did not call the Army Commander again on the same matter.

Dr. Jayatissa: Did you know the Army Commander before? Did you call him again after your third call?

Bathiudeen: I got to know about him when he was appointed the Army Commander. I called him again because I got a request from a Muslim religious leader to inform the authorities to provide additional security to the area and mosques on the day of the mass funeral of the Easter Sunday attack victims. Following that request, I called President Maithripala Sirisena, State Minister of Defence Ruwan Wijewardene, and the Army Commander. I have not called him after that.

UPFA MP Dayasiri Jayasekara, who was to testify before the PSC following Bathiudeen, was not present when his name was called by the committee.

PSC Chairman Deputy Speaker Ananda Kumarasiri then instructed the Committee Secretary to issue summons once again to Jayasekara, instructing him to appear before the committee on a later date. Thereafter, the Chairman stated that Jayasekara was being summoned before the PSC to clarify statements he had made to the media.

“The PSC summons persons who have made statements to the media in relation to the terror attacks, to clarify their remarks. I am saying this because there could be some misunderstandings regarding this,” Kumarasiri said.

However, MP Jayasekara, speaking to The Sunday Morning on Friday (28), prior the PSC sittings, said that he would not participate in the PSC hearings as it was sub judice.

“Standing orders clearly state that when there is a court case regarding a certain matter, there could be a disadvantage if that matter is spoken of in Parliament. The Attorney General sent a letter saying that as well. There are five petitions in the Supreme Court on the matter right now. So I would not participate in the PSC hearing today (28),” Jayasekara said.

Fahim testified on a request made by Haleem regarding accusations made by former Western Province Governor Azath Salley during the latter’s testimony before the PSC.

Fahim said that the accusations by Salley were mere political statements and was tantamount to character assassination.

The next hearing of the PSC is scheduled for 10 July.

July 8, 2019 bythemorninglk No Comments
More parliamentarians expressed interest to declare their assets to the public while others are in discussions with their respective political parties on the matter.

March 1, 2020 bySarah Hannan 1 Comment
2018 survey results recorded highest abundance of microplastics particles in samples collected from the northwest coastal waters covering the stretch from Chilaw to the Gulf of Mannar