Looking for unity amidst fear 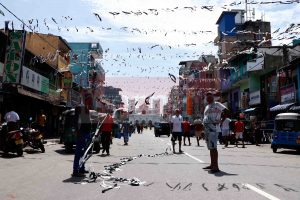 It was a sombre sight as we made our way down Jampettah Street, where the residents of the area were adorning the street with flags in black and white in remembrance of those who lost their lives that fateful Easter Sunday.

Amongst those engaging in these activities were also monks from the Buddhist Centre on the same road.

A day hadn’t passed since suicide bombers linked to the Islamic extremist group attacked St. Anthony’s Church in Kochchikade, and people were already banding together and working in unity to get through this dark time.

“The entire neighbourhood was devastated by these attacks,” Ven. Waagama Gnananda Thero said, adding: “It was a peaceful Sunday morning when we suddenly heard a tremendous noise that shook the temple and the very ground we stood on.”

As the Bodhiraja Buddhist Centre is located a fair distance from St. Anthony’s Church, it is possible for one to understand the true force generated by the explosion that day.

“The people of this neighbourhood are now living in fear and are on full alert of future possible attacks that can affect this area once again.”

The Thero said that people were still in shock at how easily peace and prosperity could be stripped away by evil acts of terror brought upon by a single motivated individual.

“With modernisation, people are open to new experiences, and they may want to try new things which may be illegal or even terror-like in nature, and there is no proper governance to prevent these people from taking matters into their own hands,” he said.

He stated that there seemed to be not a single person who could truly lead this country to complete freedom, peace, and prosperity, which is a grave problem, he concluded. 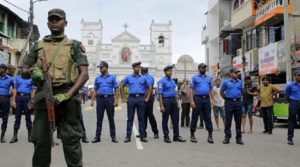 The entrance to the church was cordoned off to the public with heavy military presence. A line of soldiers stood guard while the mass destruction that had occurred stood in the foreground.

The calm scene in no way resembled the sight of terror and bodies strewn across the entrance to the church that so many witnessed the day prior.

The Sunday Morning spoke to a churchgoer who had been present at the Kochchikade Church that day.

“The service was coming to an end; the time was 8.45 a.m., when I suddenly heard a huge noise. I was seated towards the entrance of the church because I came late for the morning service that day,” said Sandesh Selva, a worshipper at the Easter Sunday service.

“My wife and children had attended the midnight mass the day prior, as so by the grace of God, they were saved.

“But if we had all been to church that day, we would have all died as later I noticed that the bomb had gone off in the pew that we usually sat at when we attend as a family.

“I went deaf soon after the blast; it was as if my ear drums had exploded. The shockwave was intense and I was thrown off my seat. I still find it a little hard to hear, but the doctors have told me it will get better with time.

“We had never experienced anything of this sort over the past 10 years; this was the first time. There was a civil war that lasted 26-plus years in this country and even still, this church withstood the test of time.”

Selva went on to say that during these troubled times, the public must come together and unite to ensure the safety and prosperity of this nation as it’s times like these that define who we are as Sri Lankans. 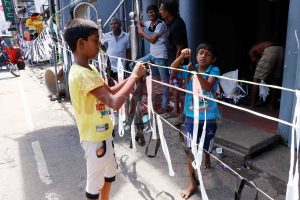 The scene of the crime was teeming with local as well as foreign media speaking to other residents who were in the area during the explosion.

Inside the church, several forensic officers and priests were assessing the damage and trying their best to identify and separate the debris from limbs and other various body parts strewn across the floor.

Speaking to another individual who ran an opticians shop just opposite the church, he said that if we were to enter the church even at this moment, it would be similar to entering a meat shop. The odour that hung in the air was very similar to that of one.

In further conversation with Newton Croos, the owner of the shop, he said that the bomb exploded at around 8.45 a.m., and he believed that it was detonated towards the side entrance of the church, closer to the altar.

“I was in my shop when I heard a tremendous noise. I knew right away that this must be a bomb. I am originally from Jaffna which is my home town, and after almost three decades of living in conflict areas, we know these sounds; they are familiar to us and bring back chilling memories.

“I ran out of my shop and immediately saw people running out of the church. Some people were bleeding and some were dragging out others who were badly wounded or even dead.

“I acted immediately and ran in and began carrying out bodies and helping the wounded out of the church. All the while, I was afraid the church may collapse due to the damage as it is an old structure,” said Croos.

He went on to state that the residents in the area were not accustomed to these situations and were clueless as to what to do next.

“They were in shock and a state of fear. I had to forcefully ask some people in the vicinity to help me bring out the bodies and help the wounded.

“However, I believe that most people in this area were not victims of this attack as many of the neighbourhood had attended the midnight mass the previous night.” 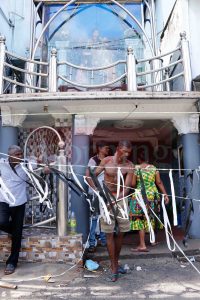 All the while, every single individual had only one thing to say.
If the Government or certain officials had prior warning and knew of an imminent threat, why did they hesitate to warn the public?

The lives of close to 300 individuals could have been saved if a simple warning had been sent to the public.

“The Government, through sheer irresponsibility and carelessness, destroyed the lives of all these people. Some sense of leadership must be displayed by the decision-makers of this nation to make sure incidents like these do not re-occur,” Croos stated.

Ven. Waagama Gnananda Thero said that “it is pointless being active once the damage had been done. Precautions should have been taken to ensure that the damage wasn’t done in the first place”.

Finally, speaking on behalf of the victims of these acts of terror, Sandesh Selva said that he had lost all faith in the Government.
“There is no point talking about it. This just proves that our Government will neither speak for us nor protect us.”

June 10, 2019 bythemorninglk No Comments
The deal struck between the Government and owners of the Dr. Neville Fernando Teaching Hospital (NFTH) in Malabe was questioned as the Presidential Commission of Inquiry probed irregularities...

January 27, 2020 byEaswaran No Comments
The authorities have begun a massive crackdown on illegal spas operating in the country after many of them were found to be brothels.