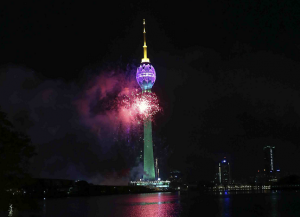 The opening of the Colombo Lotus Tower to the public has been delayed owing to security and safety that needed to be arranged.

Defence Secretary (Rtd.) General Shantha Kottegoda speaking to The Sunday Morning stated: “We have to organise security for the premises and the building. We also have to finalise safety measures and guidelines for the public,” he said, adding that some final touches to the interior too needed to be completed.

As a result, the Colombo Lotus Tower would be available for public use within a period of two weeks.

The tower was initially scheduled to be open to the public a week after it was declared open by President Maithripala Sirisena on 16 September.

In addition, Kottegoda said that restaurants and other facilities would be operational only after several months.

“Tenders have to be called for vendors. These things could take several months,” he said.

July 16, 2020 byTSM Web Desk No Comments
Private companies have been requested by the government to ensure, until September, the continuation of 50% of the total salary or Rs. 14,500 which ever is higher for their employees who have had to s

August 5, 2020 byTSM Web Desk No Comments
The voter turnout at the conclusion of the general elections is as below;