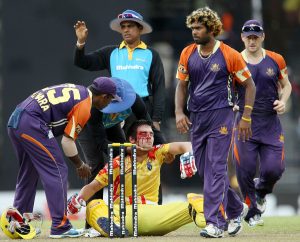 South Africa’s Rilee Rossouw gets injured after being hit by a bouncer of Lasith Malinga in the Sri Lanka Premier League (SLPL) 2012. The league never got off after its inaugural edition in spite of the continuous effort by the SLC

The eerie uncertainty is over. The three-Test tour of Bangladesh to Sri Lanka was officially postponed yesterday (28), Sri Lanka Cricket (SLC) announced. This becomes the fourth cricket series in Sri Lanka to be postponed due to the Covid-19 pandemic. Earlier, the Test series against England in March and the two limited-over series against South Africa and India in June and July were postponed indecisively owing to the pandemic. But, worse, with yesterday’s postponement of the Tigers’ Tests here, the only major cricket event remaining for 2020, the Lanka Premier League (LPL), will also be in severe jeopardy, we learnt.

“We don’t understand why the Bangladeshis didn’t want to accept even a seven-day quarantine requirement,” a senior SLC official, who is privy to developments on the Bangladeshi tour arrangement through the past months, told ‘The Morning Sports’ yesterday.

SLC yesterday said in a media release that the decision to postpone the Bangladesh series was a collective one taken by the Boards of the two countries.

“SLC wishes to announce that the Bangladesh national team’s tour of Sri Lanka which was scheduled to take place during the months of September-November 2020 [including quarantine periods] is postponed owing to the current pandemic situation. The decision was jointly taken by both SLC and the Bangladesh Cricket Board (BCB) after careful consideration of the current health situation and the health regulations, such as quarantine requirements.

“The tour will be rescheduled when the international cricket calendars of both nations open up for a rescheduling,” said the above release adding “Sri Lanka and Bangladesh were scheduled to play a three-match Test series under the ICC World Test Championship, whilst Bangladesh was scheduled to arrive in Sri Lanka on the 27th September,” it further added.

Our sources in Bangladesh revealed yesterday that BCB is now planning to organise a five-team T20 tournament in the remainder of this year. This will be in addition to staging the now-suspended Dhaka Premier League and their other domestic leagues such as Division 1 and 2, in the coming months.

This means that not a single Bangladeshi national player, including ‘star’ Shakib Al Hasan, Tamim Iqbal, or Mahmudullah, is able to play in the five-team LPL, slated from 14 November to 6 December, owing to their domestic commitments.

BCB is now likely to focus on staging their Test series with Afghanistan in November after having a safe passage of their domestic cricket tournaments next month.

The PSL and IPL impediment

Adding further to the LPL woes will be the clash between its start and the four remaining games of the Pakistan Super League (PSL), which had been postponed from March to 14-17 November.

Adding more to that, the players who are now taking part in the Indian Premier League (IPL) in the United Arab Emirates (UAE) will find it difficult to join the LPL here, since IPL is going on till 10 November, up until just four days before the start of the LPL.

As we learn, the LPL has still not finalised on a television broadcaster so far for the league. The two leaders in the trade in the region, Sony Pictures Networks India and Star India, will have other commitments during the same window; Sony covering the Australia vs. India series in Australia while Star possibly having to cover the India vs. England series scheduled to be held in UAE during the same period.

Also understood is the fact that out of the five teams/franchises of the LPL, there is only one that has been sold so far by its title owners, Innovative Production Group (IPG). All these look to lead to a possible postponement of the LPL, most likely to next January. But England are supposed to have their Test series, postponed in March, in this January window either here or, sometimes, in the UAE. The next most viable option the LPL organisers would have could be having a low-key league sans any star attraction.
Tweet
Share
Pin
Share
0 Shares

September 3, 2018 byMalik No Comments
Defending champion Rafael Nadal's progress into the US Open quarter-finals was far from smooth as he needed four sets to beat unseeded Georgian Nikoloz Basilashvili.

September 4, 2018 byRevatha No Comments
In a benevolent gesture by SLC, they're going to felicitate and economically support national cricketers of the country's pre-Test era