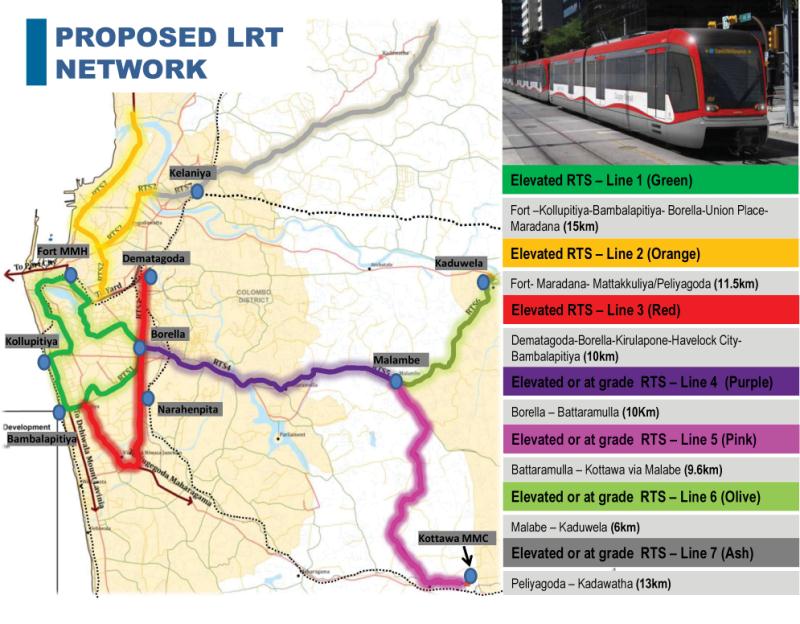 The inconsistency in the transport strategies of the country came to light last week once again with the official cancellation of the Colombo Light Rail Transit (LRT) Project which was at its final stage before construction was to begin. The cost of cancelling the project stands at $ 30 million, to be borne through public funds.

The cancellation of the long-awaited project, which was identified as the best solution to urban traffic congestion in the area, raised myriad questions regarding how the country would handle the ever-increasing transportation demand in the already congested Colombo metropolitan area within the next decade.

As learnt by The Sunday Morning, discussions on the necessity of an LRT commenced in the mid-90s and proper planning on the proposed project began in 2015. After receiving the Cabinet’s approval in 2017, the planning of the project commenced in 2018.

While it was cancelled by the Cabinet last week, which claimed that it was costly, transport experts claimed the total project would cost only around $ 1 billion, which, as per international cost estimates, is the average cost for the construction of an LRT.

Furthermore, the proposed 15 km Colombo LRT was expected to save Rs. 38 billion per year in public funds from the time it commenced operations. The project is expected to reduce travel time from Colombo Fort to Malabe to approximately 30 minutes.

The loan agreement on the project was signed between Sri Lanka and Japan last March. Accordingly, Japan had extended a loan of around Rs. 48 billion to Sri Lanka for the project. The loan for the project was offered on highly concessional terms and conditions, including a 40-year repayment period for funds obtained for consultation services with a grace period of 12 years, a 0.1% interest rate per annum for civil work and equipment, and a 0.01% interest rate for engineering services.

Accordingly, in the project, the preliminary base cost estimated during the feasibility study was $ 1,374 million and including price escalation, contingencies, and interest, Sri Lanka and the Japan International Co-operation Agency (JICA) estimated the loan amount as $ 1,850 million.

As learnt by The Sunday Morning, the detailed design of the LRT Project has already been completed by local and international consultants, and based on the final engineering cost estimated, the project cost has now come down to $ 1 billion.

When contacted by The Sunday Morning, Transport Minister Gamini Lokuge said the Ministry was currently looking at an alternative solution to the already cancelled Colombo LRT Project.

The Minister’s comment clearly implies that the mega project worth around $ 1 billion was cancelled by the Cabinet without conducting a proper study on whether it was economically viable or not or without exploring alternative solutions.

However, in contrast to Minister Lokuge’s comment, Ministry of Transport Secretary Monti Ranatunga told The Sunday Morning a week ago that the Ministry hadn’t analysed the costs of the project, even though President’s Secretary Dr. P.B. Jayasundara, in a letter sent to Ranatunga the same week, instructed him to close the project office with immediate effect, as it was observed that the LRT Project was very costly and not the appropriate cost-effective solution to the traffic problem.

Furthermore, the letter went on to state that a suitable alternative solution could be worked out in consultation with the Ministry of Urban Development and Housing and the Department of National Planning of the Ministry of Finance; these parties were also copied in the letter.

The quick succession of the incidents pertaining to the cancellation of this project raised concerns as to whether the decision was taken in consultation with transport sector experts, especially since the present administration was keen on managing the country in a scientific manner.

In January this year, former Ministry of Urban Development, Water Supply, and Housing Facilities Secretary Dr. Priyath Bandu Wikcrama wrote to the Project Director of the LRT expressing his concerns over the project funded by JICA. In his letter, copied to the Secretaries of the President, Prime Minister, and Treasury, he raised eight concerns regarding the project and requested that a response be sent by 10 February 2020.

The concerns raised in his letter were: the total loan amount, consultancy fee, unit cost of the rolling stock, the Japanese monopoly over said rolling stocks, issues pertaining to design, the marshy lands selected as locations for the depot and workshop, costs that may arise, the environmental impact, and the restricting of the design consultancy service and supervision to a lump-sum contract instead of a time-based contract.

The LRT’s Project Management Unit (PMU), in its lengthy explanation to Secretary Dr. Wickrama, seen by The Sunday Morning, stated that the land acquisition for the project was already in progress as lands in depot areas were identified and details on the same were sent to the Valuation Department for valuation purposes. Discussions were also held with the relevant chief secretariats, provincial/zonal directors, and principals of the school buildings affected along the trace.

Concerns were also raised over the silence maintained by President Gotabaya Rajapaksa pertaining to the cancellation of the Colombo LRT.

As claimed by experts engaged in the detailed design of the project, the President has been misguided by a group of so-called transport sector and economic experts.

They also believe that if the President was privy to the true picture and gravity of cancelling the project without having an alternative solution and without conducting a proper technical evaluation, he wouldn’t have cancelled this project, which was expected to resolve 10% of the traffic congestion in Colombo by 2025.

When contacted by The Sunday Morning, University of Moratuwa senior lecturer and LRT Project Consultant Dr. Dimantha De Silva said different plans were put forth from 1996 onwards, all of which recommended solutions to minimise the traffic congestion in the area.

“Several discussions on the project since 1996 revealed that project planning could go into around 10 years while the LRT takes another 10 years to build. Unfortunately, however, the people who made the recommendations are the very people who are now criticising the project,” he stressed.

Highlighting statements made by a group of transport sector experts who criticised the project since its inception in 2015, Dr. De Silva noted: “While criticising the project, some transport experts say Sri Lanka doesn’t need an LRT now but needs it in another 10 years. They are contradicting what they said a decade ago.

“Those who initially recommended the LRT, when the project began later in 2015, started opposing it saying that the LRT was not needed. Following a public outcry, they changed their tune and said we need it in 10 years. These are the people who are sabotaging the project.”

According to him, the issue in Sri Lanka’s transport sector is that those who are recommending transport plans to the sector are not transport experts.

“Any metro system will take a minimum of 10 years from planning to implementation. That is exactly what has happened to the Colombo LRT. The planning started in 2015; it took four years to complete the acquisition planning and a detailed design,” he stressed.

“With regard to the progress over the last three years, even though we started planning, a group of experts blocked it for one year, which then led to it getting delayed, after which it ultimately got approved and the feasibility was done. Following this, funds were sourced and work on the detailed design started in 2018,” he continued.

The project consultant then explained that by the time the Cabinet decided to cancel the project, the project office was ready to start the tender process.

“Even if you need it in another 10-15 years, you need to start planning now. This is the problem – inconsistencies in our transport plan,” he stressed.

The proposal to cancel the project put forward by the Transport Ministry and approved by the Cabinet stated that the project was cancelled after it was observed that it was unable to achieve the desired results.

Highlighting the reasons for the cancellation, the cabinet proposal stated that according to the basic plan of the project, it was proposed to introduce a light rail service which would present travel along the overland railway tracks as an alternative mode of transport for those commuting to Colombo for employment and other purposes in private vehicles.

However, the previous Government took steps to change that plan and implement the proposed LRT Project on a railway track built on towers, which could cause severe environmental damage. It was also found that if the project is implemented, a large number of buildings including houses and business premises will have to be demolished and the cost of constructing the railway track on towers will be immense, the cabinet paper stated.

“Moreover, it has been found that if the proposed LRT system was implemented, it will incur a heavy operational cost,” it stated.

At last week’s cabinet briefing, Cabinet Spokesman Minister Keheliya Rambukwella said: “An evaluation of the LRT in its current format has found that it is very expensive – in fact, it is more expensive than any other investment project signed by Sri Lanka. Therefore, we have to ensure that it brings the best returns. A large number of buildings will have to be destroyed, including many houses and businesses, which is not practical.”

The Minister also said the Government was studying the issue of reducing congestion within Colombo, and would present fresh proposals to resolve the problems over the next few months. However, he refrained from mentioning the options policymakers would explore.

In contrast to the Government’s statements, LRT consultant Dr. De Silva noted that the project was approved by the Cabinet only after a proper feasibility report was prepared and an Environmental Impact Assessment (EIA) was conducted by the project office in 2017.

In addition, he denied the allegations levelled by the Government that the project would damage the environment.

Furthermore, he highlighted the importance of looking for an alternative solution prior to cancelling the project for which a detailed design had already been completed by spending millions of rupees.

Highlighting the alternatives the Government could pursue, Dr. De Silva said: “When we decide what technology to use, we need to consider the capacity of the system. A bus system can carry only 10,000 passengers in one direction in an hour. The next stage is a Bus Traffic Transit (BRT) system, which is what they are trying to do at present; a BRT can increase the capacity from 10,000 to 13,000, which is marginal, especially given that you can’t have a BRT and bus service operating simultaneously. The next option would be to implement an LRT (30,000 pax), monorails, or urban rails. If these don’t fit, there is metro.

“You should decide what’s best based on the size of the city. When deciding on the best solution, the number of passengers that you are going to take in 20 years should be considered.”

Commenting on the present solutions to traffic congestion discussed by policymakers such as lane law, park and drive, etc., he said the focus should be on finding a sustainable solution.

“We should consider how many people using private cars can be converted to using the transportation solution. The BRT would be a solution only for three years. That is why we need an LRT.

“While it is costly, it’s not as costly as they say – it can save Rs. 38 billion a year. In addition, 10% of total congestion will be reduced.

“One LRT won’t solve the problem. The system should be developed and sustainable and scientific solutions should be considered by the Government to solve the present traffic congestion,” he added.

Five COVID-19 escapees so far; relatives urged to inform officials if the patient is addicted to drugs

November 25, 2020 byLahiru Pothmulla No Comments
The police today urged the family members of COVID-19 patients to inform the health and security officials if any patient is addicted to drugs.