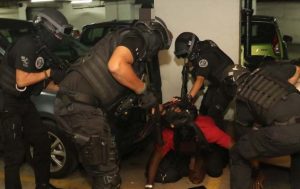 Suspects arrested in Malaysia recently for alleged links with the LTTE terror organisation have been charged by the Malaysian courts, Malay Mail reported.

The two DAP lawmakers were charged alongside S. Chandru at the Sessions Court in Melaka, and among several others charged in separate courts nationwide with ties to the now defunct Liberation Tigers of Tamil Eelam (LTTE).

National news wire Bernama reported the charge against Gunasekaran, 60, Saminathan, 34, and S. Chandru, 38, was framed under Section 130J(1)(a) of the Penal Code.

The trio were accused of committing the offence during an event at the Dewan Kasturi Ayer Keroh, on Jalan Utama, Taman Ayer Keroh Heights in Melaka on November 28 last year between 8.30pm and 10.50pm.

If found guilty, they can be sentenced to jail for life or a maximum 30 years, or a fine and can have any of their properties used in the offence confiscated.
Saminathan was also charged with possession of an item, said to have been used to perpetuate the offence linked to the LTTE, at the Human Resources and Consumer Affairs State Executive Council Office at the Melaka Chief Minister’s Department in Kompleks Seri Negeri on October 10 at 10.25am — which was a dark blue Samsung Galaxy S9+ handphone.That charge was framed under Section 130JB(1)(a) also of the Penal Code, which provides for a maximum jail sentence of seven years, and the confiscation of the item, if convicted.

All three nodded, showing they understood the charges when it was read out before judge Elesabet Paya Wan, but no plea was recorded. They were represented by a five-lawyer team led by DAP national legal bureau chief Ramkarpal Singh.

Bernama reported that the trio were then taken back to Sungai Buloh Prison in Selangor, citing Deputy Public Prosecutor Muhamad Iskandar Ahmad saying bail was not allowed as the Sessions Court does not have the authority to make a decision involving Section 13 of the Security Offences (Special Measures) Act (Sosma) 2012.

The case against the three accused are set for mention in court again on December 16.

According to the chargesheet, Kalaimughilan was accused of committing the offence at Jalan Anggerik 5D, Bukit Sentosa, Rawang around 12.35pm on October 10.

In a second charge, the 28-year-old was accused of committing the same offence in a vehicle parked in front of a house at the same address around 9.30am on the same day.

The charges, under Section 130JB(1)(a) of the Penal Code, carries a maximum seven years’ jail or a fine and the right for the displayed offensive items to be removed upon conviction.

Both the charges were read in Bahasa Malaysia by a court interpreter, and Kalaimughilan nodded to indicate he understood.

However no plea was recorded as the accused was to be tried under the Security Offences (Special Measures) Act.

In Sepang, secondary school teacher Sundram Renggan @ Rengasamy, 52, was similarly charged with possession of terrorism-related paraphernalia belonging to the LTTE, the same law used against Kalaimughilan.

The English and Physics teacher was accused of committing the offence at No 21, Jalan 6, Taman Telok, Telok Panglima Garang in the Selangor district of Kuala Langat on October 12 at 2.30pm. Bernama reported.

Like the others, no plea was recorded from Sundram Renggan when the charge was read aloud.

The teacher was represented by lawyer Kirthiraj Raja Sundram who asked for his release on bail, saying Sundram Renggan needed treatment for diabetes.

However, Deputy Public Prosecutor Azlina Rasdi objected citing his detention was made under Sosma.

Sessions Court judge Saifulakmal Mod Said ruled for the teacher to remain under detention, but ordered that the accused be provided appropriate medical treatment.

January 22, 2019 byEaswaran No Comments
Janatha Vimukthi Peramuna (JVP) Parliamentarian Sunil Handunnetti has been reappointed as the chairman of the Committee on Public Enterprises (CoPE).