The death toll following the Mahara Prison riot has hiked to 11, stated Police Media Spokesperson DIG Ajith Rohana.
A total of 107 persons injured in the incident are currently receiving treatment at the Ragama Hospital, he added. 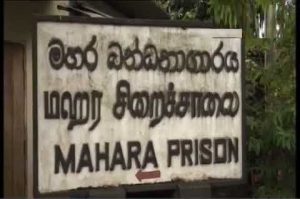 Unrest at the Mahara Prison broke out on Sunday evening (29) when a group of inmates attempted to escape the facility following a conflict with prison officials.
Prison authorities had opened fire to control the situation and a team of Special Task Force (STF) personnel was deployed to assist the prison authorities.
Subsequently, a massive fire had broken out at the prison after several inmates set fire to the health office, a storage area, and several other places within the prison.
The fire had raged on until 3 a.m. on Monday (30) and was later completely extinguished with the help of six fire trucks.
Two prison officials who were held hostage by prison inmates were also rescued.
Meanwhile, rapid antigen tests carried out on the hospitalised inmates confirmed that a total of 38 hospitalised inmates are positive for Covid-19.
It was later revealed that the rioting inmates had also broken into the prison’s medical section and consumed the stored pharmaceuticals, including the ones used to treat mental illnesses, resulting in them being more violent.

May 5, 2020 byTSM Web Desk No Comments
The Centre for Policy Alternatives (CPA) and its Executive Director, Dr. Paikiasothy Saravanamuttu filed a Fundamental Rights application challenging the decision of H.E the President to dissolve Parl