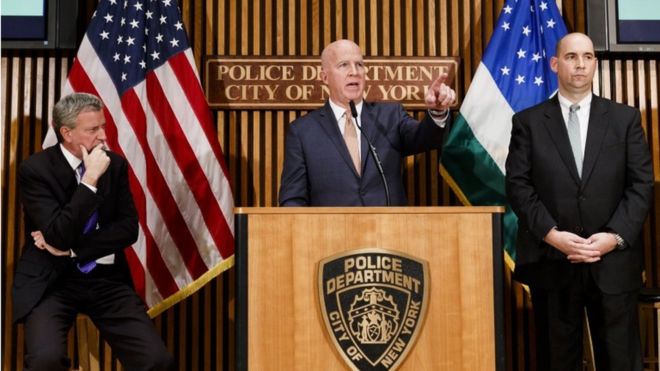 The FBI has searched a mail facility near Miami, as investigators try to find who is behind a series of suspected explosive packages.

Unnamed officials told US media that investigators believe at least one was sent from Florida.

The FBI have not released any details of their investigation.

Similar packages have also been sent to former Vice President Joe Biden and former Secretary of State Hillary Clinton, among others.

The postal facility searched is in Opa-locka, where security footage was being scrutinised. A bomb squad and canine unit accompanied federal officials, Miami-Dade County Police said.

On Thursday evening, New York’s Time Warner Center was evacuated after reports of a suspicious package, but it was later declared a false alarm. The building is home to news network CNN, which received one of the devices by post the previous day.

Earlier, FBI Assistant Director William Sweeney confirmed that the white powder found in the package sent to CNN “did not present a biological threat”.

Sweeney said thorough examinations of all the packages are under way at the FBI laboratory in Quantico, Virginia, outside Washington DC.

New York Police Commissioner James O’Neill could not confirm whether all the devices were intended to explode, but he said officials “are treating them as suspected explosive devices”.

“This has to be taken with the utmost seriousness,” he said. “As far as a hoax device? We’re not treating it that way.”

O’Neill added that authorities “do not know at this time” whether there are additional devices in the mail. He said police are working with postal service officials “to make sure if there are any out there, we identify them quickly”.

On Thursday morning, the FBI said Biden received two suspect packages and a similar package was found at a New York restaurant owned by De Niro.

How did the bomb threat unfold?

The series of bomb alerts began on Monday, when a suspected device found in the post box of billionaire businessman George Soros, a major Democratic Party donor.

Devices were sent to the following eight individuals, according to the FBI:

None of the devices went off.

What happened with De Niro?

A suspected explosive device was found at a building in Manhattan early on Thursday, local time. It is home to De Niro’s production company and Tribeca Grill restaurant.

According to the Associated Press, the security guard was off work on Thursday and had seen an image in a news report of the packages others had received.

That individual then recalled spotting something similar in the building’s mailroom and immediately called authorities who removed the device around 06:30 (10:30 GMT), AP reports.

CNN’s New York office was evacuated on Wednesday morning, after the package addressed to Brennan was found in its mailroom.

Why is this so political?

Every person who has been sent package is known to be a critic of President Donald Trump.

The attempted bombings also come just under two weeks before the mid-term elections, with US politics highly polarised.

On Wednesday, President Trump responded to the unfolding news of the suspect packages by calling for more civility in public life.

“Those engaged in the political arena must stop treating political opponents as being morally defective,” he said at a rally in Wisconsin.

“No-one should carelessly compare political opponents to historic villains, which is done often.”

The President made no specific reference to the intended recipients of the packages.

His critics have called his remarks hypocritical, as he often uses vicious language against his opponents and the press.

Former CIA Director John Brennan, who was targeted at the CNN office on Wednesday, tweeted to Trump on Thursday: “Stop blaming others. Look in the mirror. Your inflammatory rhetoric, insults, lies, & encouragement of physical violence are disgraceful.”

However, conservatives say Democrats are to blame for the state of political discourse in the US.

They say Democrats, including those who were targeted in the bomb scare, have encouraged “angry mob” behaviour. (BBC)

‘No-deal’ Brexit advice to be published by UK government

August 23, 2018 byMalik No Comments
The UK government will begin advising people, businesses, and other groups about how to plan for the possibility of leaving the EU without a deal.

August 19, 2019 byTSM Web Desk No Comments
Refugees frequenting their war-ravaged countries on vacations will risk being deported from Germany, as such “holidaymaking” means they are no longer in danger at home, Germany said.