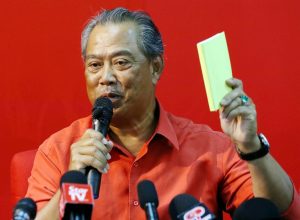 Home Minister Muhyiddin Yassin has seemingly rebuked Attorney-General Tommy Thomas for urging him to review the classification of the Liberation Tigers of Tamil Eelam (LTTE) as a terrorist organisation, Free Malaysia Today reported.

Muhyiddin said the home minister has the power to classifiy a group as a terrorist organisation and that the attorney-general has no power under the law to interfere in this matter.

Yesterday, Thomas dropped the charges against the 12 individuals accused of having links to the now-defunct LTTE, saying there was “no realistic prospect” for their conviction under any of the 34 charges brought against them.

The 12 have denied any link to LTTE, stating they only sympathised with the plight of the Tamil minority in Sri Lanka, where a bloody 27-year civil war has claimed the lives of between 60,000 and 100,000 Tamil civilians, according to figures from the United Nations.

In a statement today, Muhyiddin said that under Section 66B(1) of the the Anti-Money Laundering, Anti-Terrorism Financing and Proceeds of Unlawful Activities Act 2001, the home minister has the power to classify individuals or groups involved in terrorist activities.

“The listing of the entity is based on the latest intelligence and security information received from the authorities, including the police and other monitoring agencies,” he said.

He said the government has listed LTTE as a terrorist organisation since Nov 12, 2014.

“Based on the latest information received from the authorities, I as the home minister have strong grounds to maintain listing LTTE as a terrorist organisation,” he said.

Muhyiddin said LTTE had continued to adopt an ideology which could pose a threat to public safety and national security.

“Therefore, it is the responsibility of the authorities to take action according to the law to prevent the spread of ideologies and activities related to this group.”

Aside from Malaysia, Muhyiddin said, several countries including India, Canada, the United States and the United Kingdom maintain that LTTE is a terrorist organisation.

AG makes submissions to SC on dissolution of Parliament

December 5, 2018 byEaswaran No Comments
The Attorney General informed the Supreme Court (SC) today that it has no authority to decide on the dissolution of Parliament.

UNP candidate only after election is declared

August 30, 2019 byTSM Web Desk No Comments
As per the constitution of the United National Party (UNP) a Presidential candidate can only be named after an election is declared,  UNP Legal Secretary Nissanka Nanayakkara said.