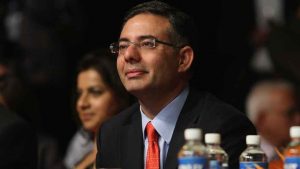 Manu Sawhney, a veteran media professional, has been appointed the next chief executive officer of ICC. Sawhney will join the organisation in February and take formal charge of his position in July, once incumbent David Richardson steps down following the World Cup.

Indian-born Sawhney was the unanimous choice of the nomination committee, which met in London this week to finalise the pick from a shortlist of four candidates. On Tuesday, the ICC Board ratified Sawhney’s appointment although his contract period has not yet been revealed. ESPNcricinfo understands none of the four was from within the field of cricket, in keeping with the ICC’s preference when it advertised for the job. Sawhney is, in that sense, a significant break from recent ICC tradition as all his predecessors this century have been involved in cricket administration before taking up the ICC role.

Sawhney came to prominence during a 17-year long career at ESPN-Star Sports (ESS), where he rose to become managing director. It was in his time with the company that ESS sealed the broadcasting deal for global ICC events in the 2007-15 cycle. Sawhney then moved on to Singapore Sports Hub, where he worked as CEO, and also sits on the audit committee of Manchester United Sports Ltd.

He resigned from Singapore Sports Hub in May 2017, soon after the emergence of a 26-page anonymous complaint was sent to SportsHub Pte Ltd (SHPL), the consortium that runs Singapore Sports Hub. A report in the Singapore-based Straits Times from May 2017 said that Sawhney went on a leave of absence after the complaint, but the SHPL board, after conducting an investigation, found that no action was warranted.

“The allegations in the poison pen letter are false and mischievous,” Sawhney said in a statement at the time. “I’m glad the board has concluded its investigation and decided that no action is warranted. With that conclusion, I feel able to move on.”

ESPNcricinfo understands this was thought to be “a non-issue” for the ICC, given that the investigation found the complaint to be unfounded.

ICC chairman Shashank Manohar acknowledged Sawhney’s strengths, saying his familiarity with the commercial side of sport fit in with the overall vision of the global governing body. “He has proven success in a number of leadership roles in both sport and broadcasting,” Manohar said in a media release. “He is a strategic thinker and understands the cricket landscape and its complexities.”

Talking on his new role, Sawhney said he was joining ICC at a time when it had set itself an “ambitious growth strategy” and was looking forward to helping “propel the sport forward into a period of significant and sustained global growth in the coming years”.

AB ready to go to Pakistan

January 14, 2019 byRevatha No Comments
AB de Villiers, the former South Africa Captain, has confirmed his decision to play at the Gaddafi Stadium during the Pakistan Super League

October 10, 2018 byRevatha No Comments
Sri Lanka's monsoon season was the only winner in Dambulla as the first ODI was abandoned after just 15 overs of play on Wednesday, 10 October.