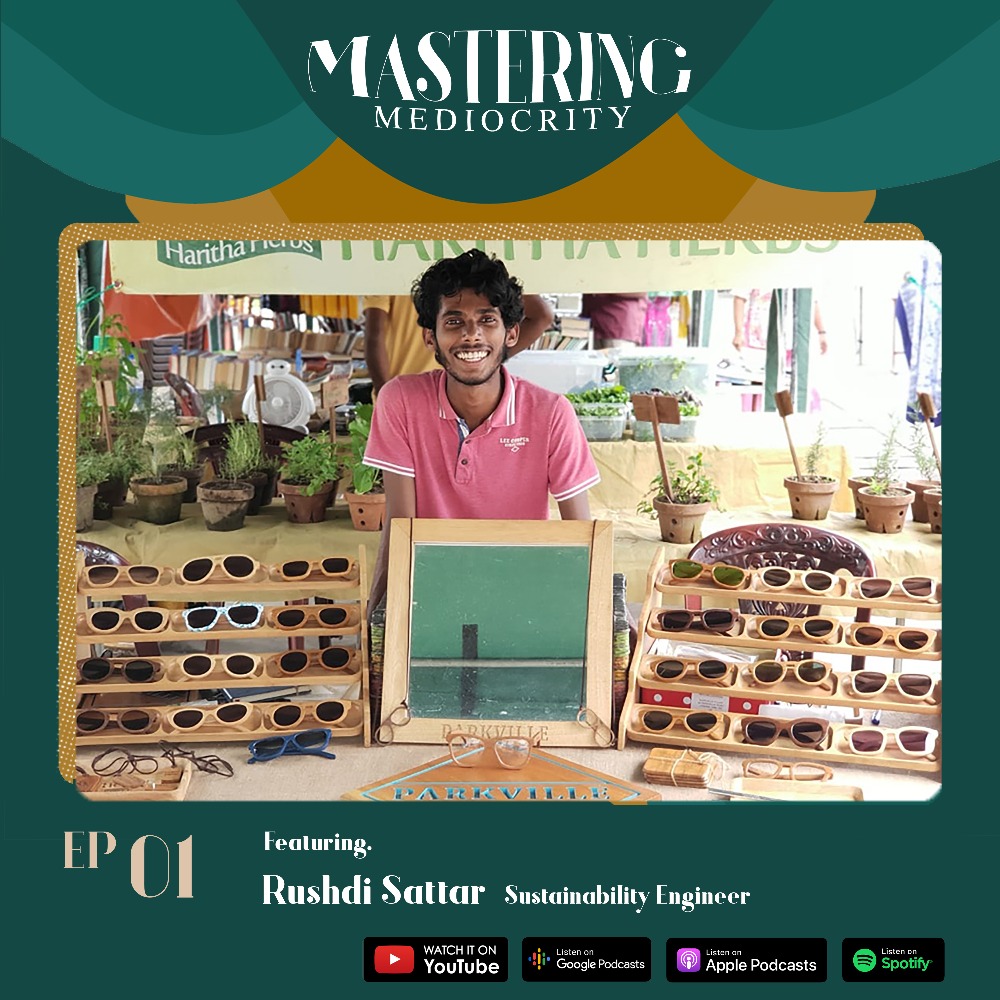 Episode 1 of Mastering Mediocrity premiered on 12 September 2020 with Rushdi Sattar as a guest. Rushdi is a product developer, sustainability advocate, and a longtime friend of mine. It goes without saying that this episode was one definitely worth your time if you are a fan of chill, “mediocre” conversations with a friend about good food, some subtle gossip, and life in general.

The corporate cliché “customer knows best” phrase has been used numerous times over the years and sometimes overused, placing many content creators in complex situations. This phrase has also led to many customers to feel “entitled” to voice over the professionals at hand, causing much distress to their minds.

“You know, there’s a lot more depth than just ‘I want this table’, and then when we do something, they’re not satisfied, and I am like exactly: ‘You didn’t specify what we were supposed to do.’ It’s frustrating,” said Rushadi.

They further discussed the continuous uncertainty in the customer’s minds on what they want, which certainly led to constant changes to the product until it is delivered to the customer. What spites these creators most is the fact that sometimes the client isn’t well versed with the process of content creating and thereby leads to them being unsatisfied with the end product.

Zeeshan also spoke about the numerous instances where he needed to keep calm, considering how sensitive some clients could be. Nevertheless, the duo made it evident that they love doing what they do no matter the cons.

What differences did you experience after moving to Sri Lanka from Saudi Arabia?

“We grew up in Saudi Arabia, so I was a good student there and everything changed when we got here because we moved here at a very pivotal point when I was a 12-year-old and there is such a big difference between the cultures. Not to forget the trees and all kinds of animals and birds around. It was a tough period and I was still expected to study hard, even though I was not doing well mentally,” Zeeshan shared.

He also reminisced about the erratic kid he used to be and how his parents had to send him to innumerable classes to keep him occupied.

One common thing both Rushdi and Zeeshan miss is the authentic taste of shawarmas from Saudi Arabia. Their description about the shawarma with the chicken and pickles left all of us listeners drooling and craving for it. The duo did not stop there.

“The food was decadent, to say the least,” said Rushdi, as the wave of nostalgia hit them. Whilst their conversation made us drool over all Arabian dishes, in their mind, if they had the chance to go for a vacation, they would take it in a heartbeat.

How did you cope with the boredom during this pandemic?

Humans have become so engaged in their electronic devices to keep themselves from feeling bored that they don’t realise their brain’s creativity level decreases drastically. Zeeshan mentioned how he is trying to minimise the time spent on social media because it’s also really hard after a while of consumption; getting back into a state of creativity has become a daunting task as he needs to start from scratch.

They continued to empathise over “how it will be for the future children because they’re going to be born into this world of technology and everything is going to be pre-programmed”.

To put it mildly, this episode was engaging and unmistakably loaded with humour. Mastering Mediocrity is nothing but a real look into the various lives of a typical Sri Lankan.

We are now battling complacency

August 16, 2020 byJennifer Anandanayagam No Comments
It is not yet "Post COVID 19", we are still amidst a pandemic

Great food and a riot of colour at ‘Foodiez on Street’

August 14, 2018 byJennifer Anandanayagam No Comments
Lining Colombo's Green Path on the warm evening of 11 August, the event was jam-packed with people of all ages, unabashedly indulging in all kinds of food. The food festival brought to the fore cuisin