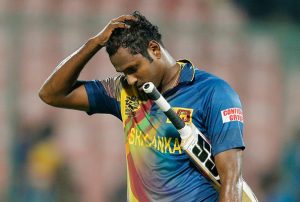 Mathews had been Sri Lanka’s ODI captain from 2013 to mid-2017, but had resigned last year, following the home series defeat to Zimbabwe.

Sri Lanka’s selectors have removed Angelo Mathews as ODI captain 10 months after he was asked to resume captaincy duties, and have appointed Test captain Dinesh Chandimal in his place. The move comes after Mathews attracted a hail of public criticism over the team’s performance in the Asia Cup, where they were knocked out following first-round defeats to Bangladesh and Afghanistan.

Chandimal, meanwhile, has had good results as Test captain since last October, but has been modest in ODIs over the past two years, having hit only one half-century in the format since September 2016. His appointment is an admission that Sri Lanka face a crisis of leadership in ODIs, as they look ahead to the World Cup in June. Over the past 18 months, Upul Tharanga, Lasith Malinga, Chamara Kapugedara and Thisara Perera have also captained the ODI team. Sri Lanka’s ODI record since the start of 2017 is 30 losses out of 40 completed matches.

“The national selectors on Sunday, decided to appoint Dinesh Chandimal as the ODI captain to lead the team in the upcoming England series,” an SLC release said. “Accordingly, they have requested Angelo Mathews to relinquish his duties as the National ODI & T20I captain, with immediate effect.”

Returned to captaincy after Hathurusingha appointment –

Mathews had been Sri Lanka’s ODI captain from 2013 to mid-2017, but had resigned last year, following the home series defeat to Zimbabwe.

The team, however, continued to perform poorly in the format even after Mathews stepped down, and when new coach Chandika Hathurusingha took over at the start of this year, Mathews was reinstated as captain.

Since that reinstatement, however, Sri Lanka have lost six one-dayers and won only two matches – both dead rubbers against a voluntarily depleted South Africa. Of those six losses, two had also been against Zimbabwe and Afghanistan. The intense scrutiny on Mathews following the Asia Cup, in which Mathews had batted poorly like the rest of the top order, and had also played a part in running out two batting partners, prompted the selectors to sack him. 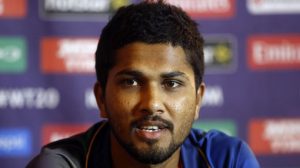 Despite Chandimal’s chequered ODI record, coach Hathurusingha has expressed hope that he can help Chandimal transform into a good ODI player.

Chandimal had led Sri Lanka’s Test team to creditable away performances against Pakistan, India, and Bangladesh, but was more recently suspended for three consecutive Tests after first being found guilty of ball-tampering, and then of breaching the spirit of cricket (Sri Lanka had won all three Tests in his absence, under captain Suranga Lakmal). The spirit-of-cricket suspension also saw Chandimal miss the ODI series against South Africa in July and August, while a fractured finger saw him sidelined for the Asia Cup.

Despite Chandimal’s chequered ODI record, as well as a poor career strike rate of 73.82 across 126 innings, coach Hathurusingha has expressed hope that he can help Chandimal transform into a good ODI player. An attacking limited-overs batsman when he first played for Sri Lanka, Chandimal had progressively become a defensive-minded batsman across formats over the course of several years. Although his conservatism has been an asset to Sri Lanka in Tests, he has sometimes been criticised for batting too slowly in limited-overs formats, and thus unfairly transferring pressure on to team-mates.

Sri Lanka’s only ODI trophy since the start of 2017 was won under the captaincy of Chandimal, however. In January, Sri Lanka won a tri-series featuring Bangladesh and Zimbabwe, and he had served as acting captain through the majority of the tournament – including in the final – as Mathews was injured. Chandimal’s scores in that stretch, in relatively low-scoring matches, were 34 off 33 balls, 28 off 39, 38 not out off 71, and 45 off 74.

July 29, 2019 byRevatha No Comments
The revived ‘RCGC Open’ golf is to be worked off over four days at the Royal Colombo Golf Club from Monday, 29 July

August 14, 2018 byMalik No Comments
Sri Lanka ended South Africa's tour of the island as they started it: by strangling their visitors with spin to win the only T20I in front of a sell-out crowd.