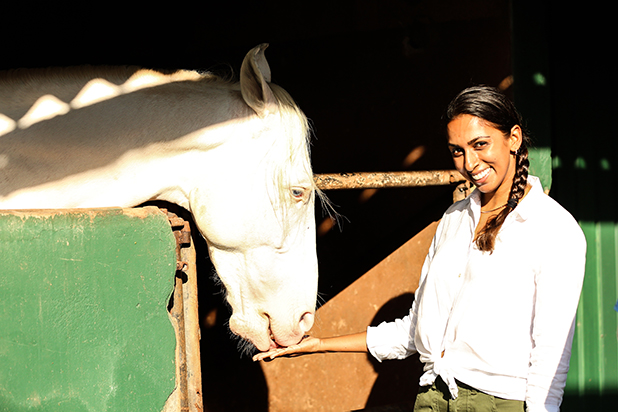 The 2020 Summer Olympics are happening in Tokyo and Sri Lanka has a new star taking thereins, quite literally, as the first ever Lankan to compete in Olympic showjumping. Jumping athlete Mathilda Karlsson (35) has qualified for the Olympic Games and will debut our island in the sport this July.

Mathilda, who was born in Sri Lanka in 1984 was adopted to Sweden when she was only three months old, she then grew up in Kristianstad in the south of Sweden and started her equestrian career at the local club Kristianstads Ryttarsällskap.

This is where she says that she developed her love and passion for horses and showjumping, “I was lucky to grow up in a very loving family that gave me all the support a child could wish for. My family gave me the opportunity to develop into the person I am today,” says Mathilda.

While the Olympics will be her first time, she is not a newcomer to the jumping industry as for the last sixteen years, she has been running a competition and trading stable outside Hamburg, Germany together with Manfred Von Allwörden.

“It is with immense joy and pride that we have succeeded in qualifying for the Olympic Games, and we look forward to the games,” said Mathilda.

We spoke to Mr. Suranjith Premadasa, the president of the Sri Lanka Equestrian association who also shared that Mathilda has acquired all the necessary points in global championships and she currently ranks at 200 out of 1500 athletes, which, according to him, are great odds.

Mr. Pramadasa who has a riding school here in the island stated that he was thankful that Mathilda decided to contact the association with her request to represent the Island, and they were more than happy to do the administrative processes for her.

He said that jumping is a very expensive sport and so for us in Sri Lanka it is difficult to sustain, “not all horses can jump it has to be specific breeds, with our resources it is difficult to invest in Olympic level training” he said adding that to get an idea of the steaks, Mathilda’s stallion is at present valued at a whopping 6.5 million Euros – something Sri Lankan athletes would have trouble affording.

The stallion in question named Chopin VA, with whom Mathilda shares a special bond, is an 11- year-old approved stallion by Casall x Coriano. Mathilda has been a part of Chopin VA’s life since he was Germany, “We have been inseparable since the day he was born,” said Mathilda adding that “Chopin and I have a very special connection; we are like best friend. At times, it feels like we can read each other’s minds.”

Mathilda educated and produced Chopin VA herself, all the way up to the highest level of the sport, “Chopin VA thinks I’m the best rider in the world because he doesn’t know anything else,” Mathilda says.

Mr. Premadasa also shared that Mathilda has offered up an opportunity for 3 local riders, to groom them in order to compete. The 3 will travel back with her, given a thousand euros allowance and while working in the breeding farm, they will be able to learn how to jump in competition, “this is an invaluable opportunity for our athletes” he said.

Wes poke to Mr. Maxwell De Silva, Secretary General of the National Olympic Committee of Sri Lanka who shared his enthusiasm in Sri Lanka’s debut in horse jumping. He said that “it is a high profile sport and therefore it will help with wide spread exposure for our Island. We will be a topic of consideration in Tokyo as it is our debut and this sport is not so popular in our part of the world.”

He said that it is an important moment in many ways sharing that as it is a sport that is judged without a gender bias, men and women compete on the same level treated on equal terms. We asked Mr. DeSilva about his thoughts on expats, those whom are essentially foreigners, those some would say are Sri Lankan’s for namesake, with only a citizenship participating and representing our country? He said, “I think if you have the skills and you are at that international level and you have the passion to represent your country then there should not be any limitations to what you are allowed to do there should be no red tape.”

“I like to use the word reconciliation for people who have left Sri Lanka for whatever reason to maintain a link with their motherland” said Mr. DeSilva.

He also spoke about Lanka’s Olympic squad for 2020, providing that it is looking good but of course we have to keep in mind winning an Olympic medal is a long shot and that we must first perform well in Asia, common wealth and SAARC games, “the Olympics, It’s a long game and big investments are necessary and for that we need full support of sponsors and the government, so hopefully if we are able to show promise then those things will fall in line.”

August 26, 2019 byThe Sunday Morning No Comments
We’ve come a long way from staring at a double-ruled question paper at an exam asking us to describe the imagery in a poem, nudging us to think of its content, mood, speaker, and structural technique.

January 31, 2020 bythemorninglk No Comments
The opening of Kaffeine