Sri Lanka’s dairy imports continued its annual trend of year-on-year (YoY) increase, as expenditure on dairy imports in 2020 have so far increased by 12.5% from the corresponding figure for 2019, despite the current import restrictions.

According to the Central Bank of Sri Lanka (CBSL) data, dairy imports in the first nine months of the year, from January to September, increased to $ 253 million, compared to the import of dairy products between January and September in 2019 which was worth $ 225 million. This increase took place despite the import restrictions placed by the Government. 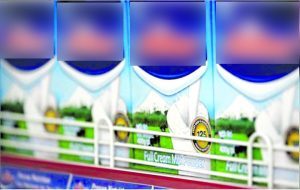 “Milk powder (imports) have significantly increased, despite import prices of whole milk powder being lower than last year, in line with prices in the global market,” the report read.

During the month of September, the CBSL noted that dairy imports amounted to $ 24.1 million, which was a significant increase of 171.3% from September 2019, when it amounted to only $ 8.9 million.

Speaking to The Sunday Morning Business on Thursday (19), All Island Dairy Association (AIDA) President Nishantha Jayasooriya stated the reason for this YoY increase was the growth of the annual consumption of milk by the local market, which has now reached 1.2 billion litres per annum.

“You can see this in the statistics in reports put out by government institutions such as the Ministry of Agriculture and the Department of Animal Production and Health. Local dairy producers only produce 420 million litres per annum. Therefore, there is a balance deficit of about 600 million litres of milk, which needs to be filled by imports.”

He explained that with the increase in consumption of dairy products, the gap between demand and locally sourced milk is widening, making it the importers’ responsibility to fill that gap. He went on to state that if local producers want to cater to local demand, they must double production and meet at least 75% of the demand, which would amount to 750-800 million litres.

“If they can cater to at least this much of the demand, the imports will eventually stop, because we will not be able to compete with the prices of local milk powder.”

However, the Founder Chairman of Pelwatte Dairy Industries, Sri Lanka’s leading local dairy producer, Ariyaseela Wickramanayake dismissed the dairy import statistics of Sri Lanka, claiming that the numbers have been manipulated and are exaggerated.

He questioned how, despite the gradual growth in local dairy industry output and its growth in market share, Sri Lanka’s milk powder imports have increased over the past few years.

“I am putting 20 tonnes of milk into the local market daily, and if you ask any of the supermarkets, they will confirm they only sell around 50 tonnes every week. This is despite the fact that my product is of a higher quality and cheaper. So, how are they saying that the consumer demand has increased?” he asked, speaking to The Sunday Morning Business.

Wickramanayake disregarded the reason for this increase in imports being higher per capita consumption of milk and milk-related products or growing population.

Furthermore, he claimed that local producers presently satisfy 75% of Sri Lanka’s national milk requirement of 700 million litres per year and are even capable of meeting 100% of the demand without the aid of imports.

Statistics from the All Island Dairy Association show that local production meets under 40% of the total domestic milk requirement, considerably below the 80% it met in the 1970s. Therefore, presently, the majority of the demand in milk products is met through imports, mostly from New Zealand and Australia. In 2015, local milk production amounted to 374 million litres, a 12.1% increase from the previous year. In comparison, imports of milk and milk products grew by 21.5% over the year. Over the last decade, imports of milk powder have grown at a higher pace than the growth in local production.

According to the CBSL Annual Report 2017, Sri Lanka imported milk and milk products worth Rs. 48 billion, which was an increase from 2016 and 2015, for which years the amounts were Rs. 36 billion and Rs. 34 billion, respectively.

This decline is attributed to the import restrictions on nonessentials introduced by the Ministry of Finance (MOF) in late March, following the impact on local currency as a result of the curfew and global recession caused by the Covid-19 pandemic. The restrictions also had a secondary goal of promoting local industries and using local resources as a replacement for imports.

These restrictions were later expanded upon to include all imports excluding fuel and pharmaceutical products and subsequently, raw material required for export purposes and construction materials too were exempted.

However, certain food and beverage category products were allowed to be imported during that time. Following this, on 15 April, the Government announced import restrictions on items such as rice, flour, sugar, liquor, and apparel products, extending restrictions to 15 July, which was once again extended until further notice.

Making Sri Lankans employable: What schools really should be teaching

December 20, 2020 byNethmi Liyanapathirana No Comments
We’d like to be like Singapore. But Singapore achieved success due to the knowledge, competitiveness, and productivity of its workforce, as the tiny country lacks mineral resources and agriculture..