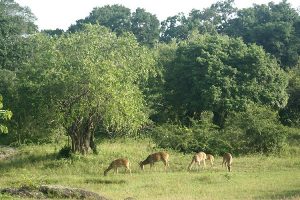 Speaking to The Sunday Morning on Friday (20), Chamikara said the plan is to carpet this road from Manampitiya in the National Park to Yakkure; he added that if that is done, it would give rise to various environmental problems.

When contacted, Department of Wildlife Conservation (DWC) Director General (DG) Chandana Sooriyabandara confirmed to The Sunday Morning that State Minister Ranasinghe had requested, on behalf of the villagers in his electorate, permission for them to build a road.

“Considering the proposal, we have decided to take a decision on whether the road access can be provided or not,” Sooriyabandara said.

When asked whether the Department is conducting an Environmental Impact Assessment (EIA), the DG stressed that it should be done by the party that requests the approval.

“Therefore, since this is a request from the villagers, we have requested the Divisional Secretary to do the needful,” he said.

According to Chamikara, the Handapana arch, which is frequented by elephants, is also located in the vicinity of the area in which this road is planned, and therefore, elephants will be at risk of losing their habitat as well as poaching.

He also alleged that the State Minister has planned to use a bulldozer to cut this road, which would pave the way for timber smuggling and large-scale sand mining in the Mahaweli River.

October 5, 2020 byCharindra No Comments
President Gotabaya Rajapaksa has advised relevant departments to increase the number of PCR tests carried out around Sri Lanka.