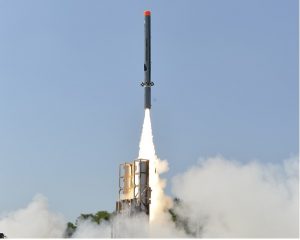 On March 27, 2019, India conducted Mission Shakti, an anti-satellite missile test, from the Dr. A P J Abdul Kalam Island launch complex. This was a technological mission carried out by The Defence Research and Development Organisation (DRDO).

The satellite used in the mission was one of India’s existing satellites operating in lower orbit. The test was fully successful and achieved all parameters as per plans.

The press release states that the significance of the test is that India has successfully demonstrated its technological capability to interdict and intercept a satellite in outer space based on complete indigenous technology.

With this test, India joins an exclusive group of space-faring nations consisting of USA, Russia and China.

The test was done in the lower atmosphere to ensure that there is no space debris. Whatever debris that is generated will decay and fall back onto the earth within weeks.

India has a long-standing and rapidly growing space programme. It has expanded rapidly in the last five years.

The Mangalyaan Mission to Mars was successfully launched. Thereafter, the government has sanctioned the Gaganyaan Mission which will take Indians to outer space.

The test was done to verify that India has the capability to safeguard our space assets which provide a critical backbone for India’s economic and social infrastructure.

India has no intention of entering into an arms race in outer space. We have always maintained that space must be used only for peaceful purposes.

We are against the weaponization of Outer Space and support international efforts to reinforce the safety and security of space-based assets. India believes that Outer space is the common heritage of humankind and it is the responsibility of all space-faring nations to preserve and promote the benefits flowing from advances made in space technology and its applications for all.

India is not in violation of any international law or Treaty to which it is a Party or any national obligation.

The test is purely defensive in nature and not directed against any country. India’s space capabilities do not threaten any country.

At the same time, the government is committed to ensuring the country’s national security interests and is alert to threats from emerging technologies.

The capability achieved through the Anti-Satellite missile test provides credible deterrence against threats to our growing space-based assets from long-range missiles and proliferation in the types and numbers of missiles.

June 10, 2019 byRandev No Comments
Three men have been jailed for life for the rape, torture and murder of an eight-year-old Muslim girl in Indian-administered Kashmir.