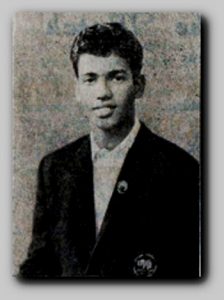 The funeral of Sri Lanka’s former Test and ODI cricketer Mithra Wettimuny, the second of the famous Wettimuny brothers, will be held today at 3 p.m. at the Borella Kanatta.

Mithra passed away on Sunday, 21 January, aged 67, due to a kidney failure.

“He had been having this trouble with his kidney for quite a while and we wanted him to do a transplant, but he refused. In the last three months or so, he was really bad,” Sidath Wettimuny was quoted saying to ‘The Daily News’ of today, 21 January.

Mithra is well remembered for opening the batting for Sri Lanka with his brother Sidath in the 1983 Test series in New Zealand. The duo thus became the third pair of brothers to open batting in a Test after the Grace brothers, E.M. and W.G. for England at the Oval in 1880, and the Pakistan pair of Hanif and Sadiq Mohammad at Karachi in 1969.

Mithra played two Test matches and an ODI for Sri Lanka, all during Sri Lanka’s tour of New Zealand in 1983.

Mithra captained Ananda College First-XI in 1970 and then led the successful Ceylon Schools team which toured India in 1969/70, a team which included future Test captains of the country, Bandula Warnapura and Duleep Mendis. The Ceylonese won the five-match Under-19 test series 2-0 and remained unbeaten throughout that tour.

After his cricket career Mithra undertook the running of Stafford Motor Company and did so successfully during the late 1980s. For the past 30 years, Mithra was with Sidath in the clothing industry.

A devoted Buddhist, Mithra was an earnest student of the Dhamma. His Dhamma teachings have been translated into books.

He is survived by his wife, who presently runs Stafford College, and his two sons, who are both pilots like their uncle Sunil.

‘The Morning’ extend our deepest condolences to the Wettimuny family at this time of sorrow!

August 29, 2019 byRevatha No Comments
He would go on to become the fastest player to 50 ODI wickets, in just 19 games, a record he still holds